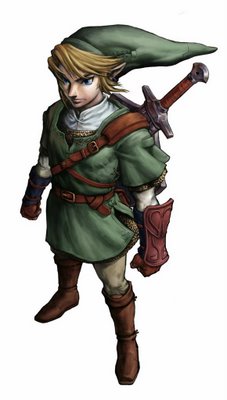 ´Zelda: Twilight Princess´ is set to become an unusually long game, boasting more than 70 hours of gameplay, not including side quests. Additionally, extra levels will become available as downloadable content.

On the downside, the game´s graphics have not been improved above and beyond the original GameCube version. This is information from a GamePro interview with George Harrison, Senior Vice President of Marketing and Corporate Communications at Nintendo of America:

GP: How long is Twilight Princess?

Harrison: There are 70+ hours of gameplay -- it's significantly longer than Windwaker.

GP: What sorts of online features are you looking forward to in the future?

GP: What sorts of differences are there between the Wii and GameCube versions?

Harrison: There is very little difference in the graphics, although the Wii version supports 16:9 displays. In the GameCube version Link is a lefty, as he has traditionally been. All the fighting and puzzles are reversed because of this, and the game basically mirrors the Wii version -- even the cinemas are flipped.

The story is the same and it's basically the same game, except for the big difference in control schemes.

I am surprised at Harrison´s comments on the game´s graphics. Having seen the two new clips, I was in no doubt that the graphics of the Wii version had been upped from the early GameCube builds. Still, I take this to mean that the GameCube version´s graphics will be better than expected, rather than the Wii version´s turning out worse. After all, the trailers looked absolutely amazing.

Not having played much of the game myself yet (I will do in the last week of November), I will now bring you guest commentary from four big news outlets that played the game for hours on end.


Nothing less than amazing

So far, Twilight Princess seems nothing less than amazing; although the opening hours had the potential to feel old hat for fans who've been through the basics time and again, the game tosses in enough new twists to keep things interesting. And the look of the game is impressive; sure, it's not HD, and some of the textures seem a bit bland, but the visual design is far more beautiful than just about anything else out there.

If Twilight Princess manages to uphold the level of quality seen in its opening hours for the entire duration of the adventure, it will unquestionably go down as one of the greats. Imagine Ocarina of Time, but polished and expanded and refined and generally perfected: that's what Twilight Princess feels like so far.

We still have a long way to go through Link's latest odyssey, and we'll be posting further details about the game over the coming weeks, all to whet your appetite for the game's November 19th release date. Having seen what we have, we're confident that the payoff will be worth the wait.
1UP

The game is remarkably cinematic, but not in the cheesy Hollywood-wannabe way that so often traps the gaming industry. At times, I had moderate issues with the graphics and controls. But part of the reason I am a little down on the game is that the first 4 hours aren't nearly as exciting or innovative as the four that follow.

Sure, it's a Gamecube port. From what I understand, the Wii version's major differences are a wider aspect ratio and Wiimote incorporation. Twilight Princess doesn't utilize motion as well as some games built for the Wii from the ground up, which I find to be a disappointment. But I do find myself enjoying playing, and I'm enjoying playing in the way one can only enjoy a Zelda title. Does Twilight Princess need to be on the Wii? Probably not. But the game is a little better for it.
Kotaku

I'm 10 hours through Twilight Princess and I still feel as though I've just gotten started. The game kicks off to a quick start and the action and challenges rarely relent. The result is an incredibly fun and rewarding experience that both feels like every Zelda we've played before and also completely new. I've always appreciated Nintendo design and Twilight Princess - even early on - demonstrates that few in this industry can make a game as epic and engaging as the Big N's top teams can. Of course, I'm not nearly through the finished product, but I have faith, and now that I've glimpsed Nintendo's newest Hyrulian adventure, I'd be surprised if it didn't go down as another genre benchmark, not to mention a cherished classic.
IGN

Every bit a killer app

The game is immersive, there is no questioning that. It is every bit a killer app for Nintendo and the Wii, and deservingly so. Despite the nitpicking, this is still the best reason to own a Wii at launch, and will probably be for some time – despite a strong catalog of first and third party releases already announced.

It's fun and deep, and according to Nintendo will take players the span of time we normally attribute to a traditional role-playing epic to complete.
Gamasutra

Source: GamePro
Thanks to: The Wiire

Posted by Falafelkid at 1:50 pm

I'm pleased to see you didn't run with the "downloadable content for Zelda" headline, like a lot of websites seem to have done.

I'm fairly certain that was not a direct reference to Zelda, I seriously doubt we will receive any updates, not that it needs them.

Whats with the reversed fighting and puzzleing? Is it somekind of techical things i'm not aware of?

I'm getting the cube version, which the game was built for, and not the wii version which will cost an additional $200 to play.

The reason it is reversed is due to Link using his right hand in the Wii version. They mirrored the game to accommodate for this change. Every thing will still be standard for the GameCube version.

Also I am glad to see that the gaming media is being a little more open and honest with the previews. They all seem to feel that it is overall an outstanding title (no surprise there) but they go on to say at times there are some control issues and the graphics are good but not great.

I find these reviews most helpful; if the graphics and small issues with control at times (more then likely being the learning curve) are the worst features of this game then I am definitely going to pick it up. I just feel I can’t trust to ultra positive reviews since they seem to come off having a biased (for a Nintendo or Sony games)

When talking about Zeldas graphics it's very important to take the sheer size of the world into account.

If Nintendo had went for small, tiny and closed levels everything would look much better granted.

However, it wouldn't have been a real Zelda game without an open world to explore had they chosen to approach it differently and thus it's no mystery that a compromise was neccessary in order to pull it off, to stay true to the way they had envisioned it and obviously the way a Zelda game is supposed to be, namely open ended.


And if you regard them as such, if you keep that in mind, the graphics are nothing short of breathtaking!I mean just compare them to say GTA for example and it should become pretty clear to you.

Hi Falafelkid, where's the "big secret" ? do you still beleive there's such a thing ?

^ anyone who pays $250 more for the same thing is a dumbass.

Anonymous: A lot of us are planning to get a Wii for FAR more than Zelda (though most of us are still getting Zelda anyway ~_^). If all you see is that, then I assure you that you are not looking hard enough at the Wii launch lineup.

YOUR NOT MAKING YOURSELFS LOOK GEEK COOL YOUR MAKING YOUR SELFS LOOK TOTAL NOOBS WHO PICKS 4;3 OVER 16BY9 WHO PICKS STANDARD PADS OVER WIIMOTE NUNCHUCK AND ALLLSO THE ALREADY IMPRESSIVE LOADING SPEEDS WILL BE EVEN BETTER ON WII

SHUT UP YOUR IMBARASING TO OTHER NINTENDO FANS

Ials, has stated the levels are open and needed a sacrafice to do so.
I disagree. It is because the game was almost done for the gamecube when they decided to bring it to the Wii that the graphics are a little lower. In order to get the mirroring, and wiimote movements etc.. done in time for launch.
If it was made for the Wii from the ground up than I might agree.
Also these are first gen games.
I expect them to improve over the next few generations of games.

I’d just like to let you know how much I learn from your website Favorited it.Hope 2 be back soon for some more good stuff

Pretty effective data, thanks so much for your article.