The recently announced ´Beyond Good & Evil 2´ seems to be coming to Wii after all. After initial rumours that the game was only due to be published for Xbox360 and PS3, Ubisoft CEO Yves Guillemot told Next-Gen that the original was probably too difficult (my own formatting).

We saw with Beyond Good & Evil that so many customers were extremely happy with the game. (...) We had a different audience at that time. We had more core gamers than casual gamers than we have today.

We think the game was probably a little too difficult for the general gamers at that time. We’re going to make it more accessible and make sure that it’s really done for the new generation that’s come into videogames.

Clearly, Guillemot is referring to their expanded audience on the Wii and DS platforms. I take these comments as confirmation that the game is coming to Wii.

EDIT Also, a Star Wars exclusive has just been announced. It will be the spin-off from the animated series and movie ´The Clone Wars´.

Source: Next-Gen
Thanks to: Kotaku, Joystiq

I have recently had a bemusing exchange with a PR rep from a German agency, working for a number of clients in the videogame industry. "´Dragon Ball Z Burst Limit´ for Xbox360 will be the first Dragon Ball game on next-gen consoles", she said. "But," I replied, "´Budokai Tenkaichi 2´ was already available on Wii…?" She was adamant that she was right, though: "No, the Wii is not a next-gen console," she lectured me. I tried to hesitantly voice some doubts, but she made her stance quite clear: "You may say the Wii is next-gen. But no real gamer would ever say that."

Apart from this being a textbook example of extremely bad PR (insulting clients should not be a priority), it simply annoyed me that people in the industry (albeit merely a PR agent) thought this way. To me, there are a few reasons why the Wii is, of course, as next-gen as the two competitors. But I will only detail the most convincing one for now.

Consider a generation of three consoles, by Microsoft, Sony and Nintendo, respectively. One of the three is considerably underpowered when compared to the others, which keen gamers notice in the visual quality, yet the console outsells its competition in most markets and is the clear market leader worldwide. Gaining momentum among third party publishers as a result, the portfolio is growing fast. But there is an increasing amount of ´shovelware´ - cheaply produced games that are ports, cheap knock-offs or uninspired sequels, all designed to make a quick buck off of the market leader and the hype surrounding it.

Now, in this scenario, would you really consider that console not next-gen? Would you not think it on par with the competition? If so, you have just judged the PlayStation2 inferior to the original Xbox and the Gamecube. Yes, the PS2 was significantly underpowered compared to the competition. Its portfolio was impressive in numbers, but riddled with shovelware. But it was the clear market leader. The above situation is evident both with the PS2 last-gen and the Wii now – but noone ever refused to call the PS2 next-gen back then.

The only difference, of course, is that the PS2 came out some time before the other two (which also explains the significant gap in hardware power) and we did not have a chance of comparing it with the competition. Or did we? Way before the advent of Xbox and Gamecube, back in 2000/2001, there were two consoles competing for dominance in that generation: Sony´s PS2 and Sega´s Dreamcast. With a headstart to market, Dreamcast games looked far better than the launch portfolio of the PS2. The ´Shenmue´ series and ´Jet Grind Radio´ were impressive visual feasts back then and no PS2 game could match that at or around the launch of Sony´s console. Developers simply had not yet had the experience necessary to use the PS2´s hardware. Particularly the low graphics memory plagued developers and this struggle is evident in those earliest games.

I mean, when have you last thought about ´Fantavision´ or ´Ridge Racer 5´? Check Wikipedia´s Chronology of PlayStation2 games and see how many pages you have to scroll down before you get to a decent title. But I digress.

My point is that back then noone considered the PS2 last-gen compared to the Dreamcast. Later, noone thought that Gamecube and Xbox were in a league of their own, though one might have argued that they were, from a purely technical point of view. But the overall gameplay experience on all three consoles was near enough to think of them as equals. And with the Wii nowadays, it should be no different.

Wii Titles like ´Far Cry: Vengeance´ or ´GT Pro Series´ obviously do not do the platform justice. I mean, Ubisoft had a total of seven or so Wii launch titles. Even a giant like Ubisoft cannot churn out that many AAA games, let alone on a brand new console. Accept shovelware for what it is and recall how much crap we had to sift through, and still do, in the PlayStation2´s portfolio.

Instead, I ask you to compare ´Metroid Prime 3´ and ´The Conduit´ to ´Halo 3´ (in standard or enhanced definition). Or compare ´Super Mario Galaxy´ to ´Banjo-Kazooie: Nuts & Bolts´. There is as much (or as little) difference between those games as there was between a ´Soul Calibur´ on the Dreamcast and ´Tekken Tag Tournament´ on PS2 or a ´Resident Evil 4´ on Gamecube and the same game on the PlayStation2. I ask everyone to be brutally honest here. If the PlayStation2 was not last-gen then, then neither is the Wii now.
Posted by Falafelkid at 9:18 pm 16 comments:

Nintendo not present at ´Games Convention´

Nintendo will not be present at this year´s ´Games Convention´, Europe´s largest computer and videogames fair. The show will take place in Leipzig for the last time in August this year. In 2009, it will be replaced by the ´GAMESCom´ in Cologne.

Nintendo Germany announced their withdrawal from the fair only an hour ago in a press release (German, registration required), which I have translated here:

In August 2008, Nintendo Germany will not be present at the Games Convention in Leipzig with its own booth.

Over the past months, the company has had many positive experiences with smaller, local events and national promotional tours, at which it presented the highly original gameplay concepts for the portable Nintendo DS and the home console Wii.

Going into the second half of 2008, Nintendo will favour being present at nationwide events rather than a central trade show: its videogames will be experienced at various outings and within different surroundings.

"Following the E3 trade show this year, Nintendo will start a nationwide roadshow, in order to inform our media and trade partners about the newest games as early as possible," Nintendo Germany´s General Manager, Dr. Bernd Fakesch added.

The press release goes on to clarify that this decision is in no way meant as a criticism of Europe´s largest trade show. A decision about attending the show´s successor, next year´s Cologne GAMESCom, has not yet been made. 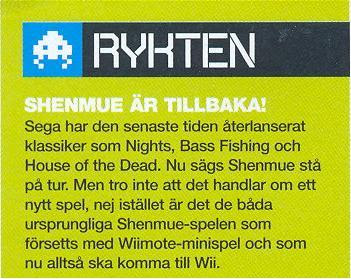