A video clip allegedly showing a presentation of Nintendo's next home console has surfaced. A number of regular commentators here have argued about whether the clip should even be discussed. I am certain that it is fake, but believe that it is worth pointing out why. Here is the clip.


This clip was uploaded by YouTube user privateconnex and is entitled ´Nintendo Project Cafe leak "private developer conference"´. The clip itself, however, starts with a slate reading "Private Presentation of 'Project Cafe' by a Video Games Editor". Now, this is the most compelling reason to believe this is a complete fabrication: no videogames editor in the world would be giving a presentation of gaming hardware that is yet to be made public. I even believe that no videogames editor in the world has even seen the console. But even if so, it is hard to believe that Nintendo would trust media outside of Japan. The young woman seen in the clip is clearly not Japanese.

Another aspect is the location. The clip appears to be filmed inside a lecture theatre, commonly found in universities. These are practical, but no-frills places for any presentation. A company like Nintendo would on no account book a venue like this. Next up, the slides are reminiscent of previous fakes. I wrote about those images: "Any kind of presentation would use renders rather than simple outlines. Such basic images are only ever used in patent documents. This is surely a fake." If used in any kind of presentation to the outside world, it is even more important to keep up appearances.

Lastly, the person following the presentation appears to resemble Nintendo of America president Reggie Fils-Aime. This might, at the surface, appear to validate the video as real. On second thought, it does the very opposite, though. If this presentation really did take place and someone in the audience would want to break the NDA they undoubtedly had to sign prior to entering and hence risk their job, how much more foolhardy would it be to film the event sitting right behind Reggie? This is just plain stupid.

Various points I made earlier with regard to the hardware are also applicable here. It might strike us as odd that previous fakes have all shown the same hardware design, both console and controller. But either they originate from the same person or subsequent fakers realised that their work would become more credible if they picked up on it. You can rest assured that all images and videos purporting to show the Wii successor so far are fake.

What we can do, legitimately, is speculate on the basis of facts. There is very little, but here is a little more. This is an invitation by Nintendo of Europe for a media reception at E3. Notice the design. 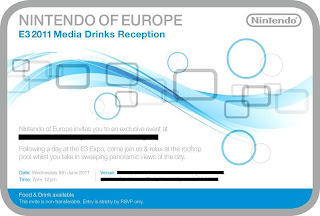 Note that the imagery used is a combination of the squares with beveled edges we know from the DS family with the blue circles that have appeared in connection with the Wii. Combining them is what appears to be a stream or a wave. This may suggest that the next console will bring home consoles and portables closer together. It also may corroborate that the console will be called Stream, as previous rumours suggested.
Posted by Falafelkid at 11:37 pm 48 comments:

The first alleged Project Café screenshots are in circulation. A blogger on Gameolosophy has posted two images, apparently showing Pikmin 3 and Endless Ocean 3. There are various reasons why they must be fake. The blogger seems to believe they are real, though.

I do not claim these screenshots to be official.  But my sources gave me the scoop on a million things about the new Nintendo console before other sources caught wind of them (Pikmin, Rockstar, Retrostudios).  And through these sources, they have supplied me with some screenshots for two games. 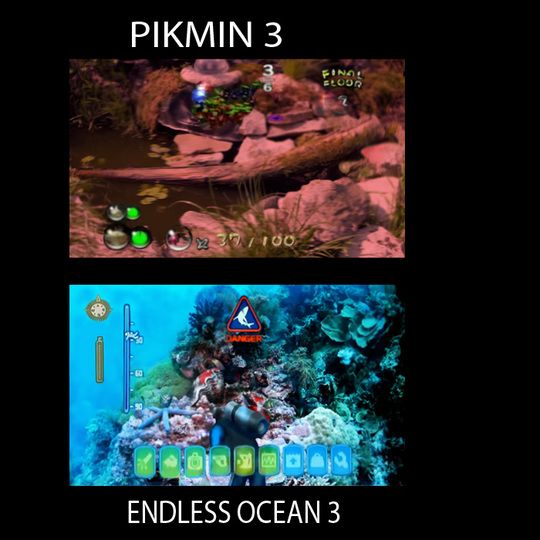 I cannot verify whether said blogger really did post those rumours first. I certainly read them elsewhere. The images in question are, quite obviously, fake. They appear to be real-life photos with crude graphical elements and text from videogames pasted on top. What is more, there are a number of interesting comments below the article. User Watchdog points out that the Pikmin screenshot just pasted the HUD from Pikmin 2 onto a real photo. He then notes “that ´Final Floor´ makes no sense when you’re outside.”
The article, though careful to assert that these images are to be thought of as rumour, lacks any kind of journalistic approach. The author even admits this.
I post anything I receive on here for your amusement/entertainment and my amusement and entertainment.  You have the choice to believe or not to believe.  It doesn’t matter.  E3 will be here before you know it.
I guess we have another rumourmonger here who is keen on artificially pushing up her click count.
Posted by Falafelkid at 10:56 pm 33 comments:

Nintendo has sent out invites for their E3 press conference. The invites contain an image of three warp pipes from Super Mario Bros. in black and white. Thanks to my good friend Michi-Hiro for the image. 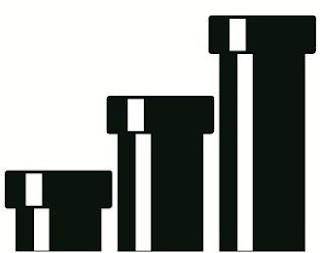 Could this be a clue of sorts? The image could hint at a linear progression, perhaps to leap higher and higher with the possibility to be sucked deeper and deeper in to the tubes. Height and depth could be the ideas conveyed here. Also, the number three may play a role. Obviously, there are three dimensions. But the first two tubes could also stand for the Nintendo DS family and Wii console - the current consoles and cornerstones of Nintendo's success - with the promise of the next hardware surpassing them. I believe that the ideas of progression and extension are quite obviously evident here. What do you come up with?

EDIT Here is the image within the context of the mail invite. 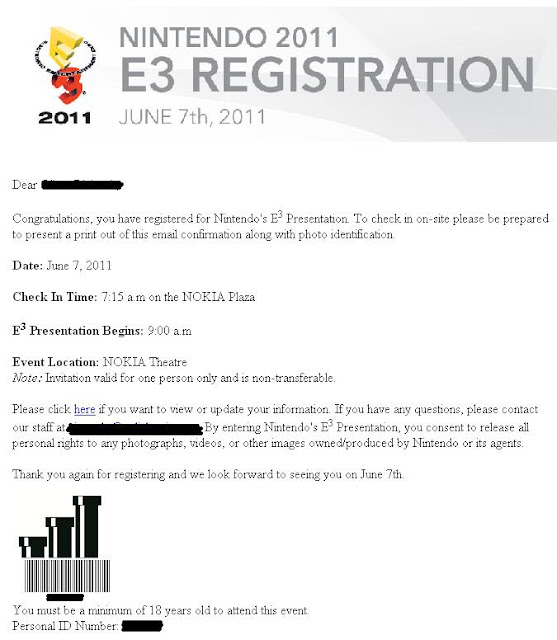 EDIT Reader Kevin noted that this image was already part of last year's invite and has kindly uploaded an image. He also asserts that it was used before then. I have to admit that I did not remember. But now, I think we can safely assume that the image contains no hidden meaning with regard to Nintendo's next home console.
Posted by Falafelkid at 6:32 am 33 comments:

Microsoft may also be announcing a new home console at the E3 expo in early June, Develop magazine has learnt. At the very least, one publisher is in possession of early hardware to work on launch titles.


The successor to the Xbox 360 console is on desks at an unnamed Electronic Arts studio, Develop understands. The new hardware, sent to EA last month, is a very early build with no casing – it is in fact being stored inside a PC shell. EA developers are getting to grips with the tech to create first-generation software, Develop has been told. (...) Develop’s source is not employed at either company.

The source believed, but did not have certain information, that the new Xbox would launch by the end of 2012. The individual expects an announcement will be made, at least in some form, at E3. (...) A seperate inside source has told Eurogamer that an E3 reveal for the new system is "highly unlikely".


There are a number of things I would like to point out. Firstly, furnishing any third party with early hardware is a move that every manufacturer will consider very carefully. The only reason to do so is to facilitate good enough launch titles. There is no reason to supply publishers before they need to start actual development. Add the fact that launch titles usually have a slightly shorter develoment cycle - I expect no more than two years and perhaps as little as one-and-a-half - and you can safely assume that Microsoft may be shooting for a late 2012 launch at the earliest and early 2013 at the latest. This corroborates the above rumour and, in turn, may suggest that Microsoft will indeed announce the Xbox360 successor this year and use E3 2012 to announce launch dates and pricing, as well as to offer hands-on sessions.

My guess is, though, that this June would be a little early for an initial announcement. Microsoft obviously want to steal Nintendo's thunder, which must be the only reason why they would churn out a new home console, anyway. But they still have plenty of time left to do so, if they do not mind handing this E3 to Nintendo. In fact, many companies are following Apple's lead of making hardware announcements at their own dedicated events, because then the news will focus exclusively on them.

As far as motivation for a new console is concerned, both Microsoft and Sony want to play out this generation for as long as possible. But hardware defects and extra costs of one billion dollar for extended warranties aside, Microsoft learnt the lesson that it can help your installed hardware base to be first to market. Admittedly, Sony's many problems did their part to facilitate Microsoft's early lead. But regardless of that, by the time the PS3 launched, the Xbox360 already had an impressive software portfolio. This time, Microsoft will not be able to beat Nintendo. But they certainly will not want to launch last. Then again, Sony will employ the same strategy. So expect them to announce a new home console soon, as well (though I expect they will wait until the NGP has been on the market for some months).

In an exclusive statement I can add to the story, an anonymous source (who may or may not be in the know about the details of Project Café), has responded to this rumour with these words: "Microsoft better be bringing more to the table than mere hardware power."
Posted by Falafelkid at 8:25 pm 17 comments:

There are fresh rumours regarding the controller of Nintendo's new home console. The touchscreen will offer haptic feedback in a way that allows different surface structures to be distinguishable, Swedish gaming news site Loading has learnt from a "source close to Nintendo". Apparently, the console may be called Nintendo Feel. Thanks to Fook for this one.


The revolutionary aspect will once again be found in the controller itself. (...) Haptic technology is a form of tactile feedback used to simulate the experience of touching different objects shown on screen. The player can move their fingertips across a surface and clearly feel the difference between soft, smooth or rugged textures. Electronic companies across the world have been conducting research in this field for years. It’s been rumored that Apple is close to patenting a similar technology, and we’ve seen the Toshiba demonstration of ‘New Sensation UI Solution’, that applies a thin film over a screen in order to achieve a haptic effect. (...)

You have to try Nintendo Feel to really understand. But the idea itself is very easy to sell, no matter if you are aiming for hardcore players or the wider audience that was first introduced to games through DS, Wii or Kinect. (...) Remember Vitality Sensor? It will most likely make a comeback at this year’s E3, though not as a peripheral for Wii, but as a key feature of Nintendo Feel.

The author goes on to imagine stroking and feeling fur in ´Nintendogs´ or drawing patterns in the sand in ´Legend of Zelda´, feeling the cool river, hot lava or the structure of the bark of an old tree.

You may remember that an early haptic accessory, the Novint Falcon, has been mentioned a number of times before the Wii was fully unveiled.
Posted by Falafelkid at 6:24 am 49 comments: