There are substantial rumours suggesting that Namco Bandai´s ´Beautiful Katamari´ will not be released for the PlayStation3, IGN writes. Originally, the game was in development for Xbox360 and PS3.

Up until recently, the developer continued to work on both versions of the project. However, sources close to Namco Bandai tell IGN that the studio ran into some trouble with the port of the game to PlayStation 3 and these issues, coupled with the stalled sales of the system, have led to the project's quiet cancellation. Looking to better-than-expected sales of Wii, the company has, say insiders, re-shifted resources to ready a Wii build of Beautiful Katamari instead. Given that the title cannot be ported from Xbox 360, the game is being re-concepted for Wii.

´Re-concepted´ might mean a different game, however. Newsweek technology editor N´Gai Croal revealed on his blog two weeks ago that ´Beautiful Katamari´ would become an Xbox360 exclusive.

A little birdie with good reason to know--and to gloat--informed us that the We Love Katamari sequel, Beautiful Katamari, would join the ranks of Xbox 360 exclusive titles. (...) We've since confirmed that an exclusivity deal between Namco and Microsoft is very close to fruition, likely to be announced at the E3 Media and Business Summit in July. Namco is enjoying the warm embrace and ever-deepening ties with Microsoft, while Microsoft sees this as an opportunity to change the perception of Xbox 360 as the barracks for bald space marines and little else.

This doesn't spell the end of the world for the PS3; after all, none of these games will single-handedly turn this generation over to Microsoft, and each is all but certain to make its way to the PS3--eventually. But it demonstrates the impact that the continued weak PS3 sales are having on the strength of the platform: the installed base disparity between Xbox 360 and PS3 means that Sony isn't strong enough--or willing enough to reach into its pockets--to hold on to the types of games and franchises that belonged to it alone during the PS2 era.

Whether or not ´Beautiful Katamari´ will make its way to Wii, the console is certainly gaining rapidly in terms of development focus. Only days ago, the Nikkei newspaper (via VarietyAsiaOnline) revealed that major Japanese studios were switching their resources from the PS3 to Wii, with Namco Bandai implementing the most drastic changes.

Square Enix, another Japanese software major, has no plans to develop titles for the PS3 until sales improve enough to make the steep development costs financially worthwhile.

The changes at Namco Bandai should come as no surprise. After all, the company only just shipped their first Wii title, well over half a year after the console´s launch. And the Wii´s success is still more than evident.

This success is already reflected in the number of exclusive titles. The good people over at Gaming Target are keeping score and this is what it looks like:

You might want to compare this in detail with the the figures from mid-May. Clearly, developers have already jumped on Nintendo´s bandwagon. And they are continuing to jump.

[It is] a game-creation service that will allow developers large and small to create new downloadable video game content for sale by Nintendo through the Wii Shop Channel of the hot Wii™ home video game system. WiiWare paves the way for smaller, more creative games to make their way to the public at lower prices, without any inventory risk to developers. The first WiiWare content will launch in early 2008.

What's more interesting is that Nintendo isn't only seeking WiiWare from established publishers and developers like Ubisoft and Sega. At a Nintendo developer's conference earlier this week, the company informed attendees that it was seeking from indie developers as well. (...)

Fils-Aime told us that while Nintendo, as the retailer, would itself determine the appropriate pricing for each game on a per-title bases, the games themselves would not be vetted by Nintendo. Instead, Nintendo would only check the games for bugs and compatibility

Nintendo is rather late with this offering. The PS3 already offers all-new downloadable content with games like ´Gran Turismo HD´. What is more, at least some of those games are free. Microsoft may charge for their Xbox Live Arcade service, but they have been up and running for some time already.

What will be interesting to Wii owners is that those games will not be vetted by Nintendo. Providing they do not receive an ´Adults Only´ rating, Nintendo will allow them to be published via WiiWare unchecked. With Nintendo being notorious for monitoring third party content very closely, these games may bring something new to the Wii.

Microsoft Germany used the PlayStation3 logo font in a 2002 booklet promoting the original Xbox. It is entitled ´Nur Zombies spielen nicht´ (Only zombies don´t play). Here is a scan from the 25-page booklet. 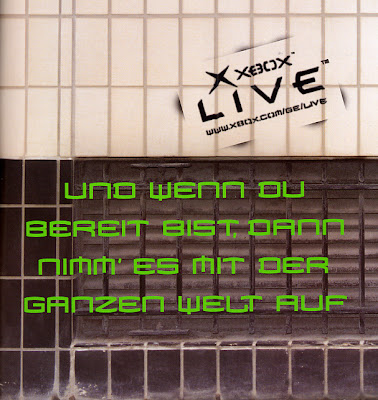 The font is famous for being the typeface used in the logo of the ´Spider-Man´ movie trilogy, which was produced by Sony Pictures.

I found this while cleaning up my desk. So is this just an amusing find or are there any possible consequences to this use? Apparently, fonts are often not subject to copyright.

However, according to CVG, Sony designer Teiyu Goto noted that Sony owned the rights to the font, speaking to the Official PlayStation Magazine.

Rather than creating a typography with all the risks that entails, it was wiser to use the one from Spider-Man, for which Sony has the rights.

The original Spider-Man movie was released in 2002, the same year the booklet was sent out to media outlets in Germany. I am interested to see whether this gets picked up on by some legal experts.

Thanks to: Wikipedia, CVG

Xbox360 closing in on PS3 in Japan

The Xbox360 has come within 2.000 units of the PlayStation3 in terms of weekly hardware sales in Japan. This is owing to both the phenomenal success of Namco´s ´Eternal Sonata´ for the Microsoft console (selling 49.334 units last week), as well as the failure of the PS3´s ´Ninja Gaiden Sigma´ to top that (the game selling 46.307).

Here are the hardware sales figures for the three big consoles. All numbers are courtesy of Media Create.

First of all, I apologize for the lack of updates recently. I was on holiday for a couple of weeks.

The news in hand is, of course, a momentary blip in the sales figures, spurred by the release of a single game and the fact that Sony is considering a price drop (which would cause wiser buyers to hold off on that purchase).

However, this must nevertheless be seen as more bad news for Sony. Investors and studios alike will see the Xbox360 closing the gap so significantly in Japan as another landmark in Sony´s fall from grace.

Source: Media Create
Thanks to: Joystiq

French gaming site Jeux-France (translated via Babelfish) reports that Nintendo will show off a ´large revelation on the Hardware level´ at the E3 Media & Business Summit starting July 11th. No more information is given.

What could it be? Could it really be something far out or are we talking about that funny audio translator that was mentioned in an interactive description of the Wii remote?

My money is on the latter. After all, Nintendo has patented some sophisticated form of speech recognition and conversion that could enable some really cool gameplay features.