Why the Wii needs a price cut fast

Smooth ride up until now

The Wii needs a price cut fast and here is why. Up until now, Nintendo has had a very smooth ride this generation. They started out with the lowest price proposition by far and the most revolutionary, intuitive and immersive control scheme and biggest fun factor to top it all off. At least, that is what more than 50 million people around the globe think.

Sure, the white box can only deliver 480p as its top resolution. And the rest of its hardware is equally modest, making sure that most graphics-intensive games by third parties get either a toned down version, a completely unique adaptation (some examples are ´Overlord: Dark Legend´, ´Dead Space Extraction´, ´Resident Evil: Darkside Chronicles´) or pass the console by completely. But, all the unquestionable Nintendo goodness aside (´Metroid Prime 3´, ´Zelda: Twilight Princess´, ´Super Mario Galaxy´), hardcore gamers got a few third party gems, too. Particularly in the survival horror genre, Wii boasts more titles than any other console ever offered, I reckon (I have counted 20 already) and some are absolute must-haves. So, Wii sold to new gamers as well as to veterans, who probably own more than one console anyway. And it has been smooth sailing for Nintendo up until now, with Wii selling about as many units as the two competitors put together.

Microsoft seemed to endlessly tweak the SKU variety of their Xbox360 as well as their price. And, leaving the elusive fun factor aside, the 360 has been the best value proposition by far for a long time. But even this circumstance could not change the reality that is each companies' respective market share. Sure, Nintendo has hit dry spells in the past, with other consoles selling more units for a few months in one territory or another. But these dips were usually related to a lighter release calendar. When bigger titles drew nearer, sales rose again.

Not anymore, it seems. The news of Wii hardware sales taking a 30 percent dip in the US last month despite the release of ´Wii Sports Resort´ should have Nintendo worried. Very worried, in my opinion. Because the title should move hardware as much as any other Nintendo game. A gigantic marketing campaign in the US should have made sure that the consumers were aware of the release. The fact that it did not move a significant amount of hardware can only really mean one thing: everyone that wanted to buy a Wii in the said territory has bought one. If a title like ´Wii Sports Resort´ cannot invigorate sales, then no title can (at least not of Nintendo's casual variety, which undoubtedly was the backbone of the console's success). The only option available to Nintendo of America may be a price drop. This would surely convince more people to hop on the Wii bandwagon. But software no longer seems to move hardware.

First, a little reality check: Am I being unfair here? Of course, all the other consoles sold badly in July. Well, yes. But the PS3 only took a 25 percent dip and the 360 went down a mere 15 points, only half of the Wii's loss. That is a significant difference. But what about other territories? In Japan, year-to-date year-over-year changes show big losses for the console. Europe may be the Wii's last resort (this is actually a double pun, if you remember an obscure PC game from 1996) but a worldwide downward trend is becoming clearer and clearer, it seems.

But what about other upcoming titles, particularly the third party portfolio, which is still a sore spot for Wii owners? Surely, exclusive titles like ´Monster Hunter Tri´ or ´Red Steel 2´ will sell hardware to the traditional crowd, if the more casual titles now fail to shift consoles. Unfortunately, I have it on good authority that both of these highly anticipated games will not deliver. They may look nice, but both titles are being rushed out of the door. Wii owners will have a few good survival horror titles to mull over. But there is no shortage of those on the platforms. So a ´Dead Space Extraction´, no matter how good it will be, will not become the killer app that a polished ´Monster Hunter Tri´ could have become.

Price cut the only solution

Especially with the PlayStation3's price drop and sleeker re-design, as well as motion control around the corner for both high definition consoles, Nintendo is coming under intense pressure this generation for the very first time. The only way out seems to be a price cut, preferably to be announced around Tokyo Game Show next month (though Nintendo will not exhibit, as always). I do not see any alternative for Nintendo (and I am not alone with this opinion), if they want to maintain the impressive momentum they have exhibited so far. This is the curse of a runaway success: maintaining it. After all, a boom, in economics, is a highly unstable and volatile state. And if they do not re-position the Wii's price point, Nintendo may soon find out the hard way.

EDIT Looks like I was spot on with my analysis. The following image was published by Kotaku. It may be fake, of course. But both the timing and extent of the price cut would fit perfectly, so I believe it is legit. 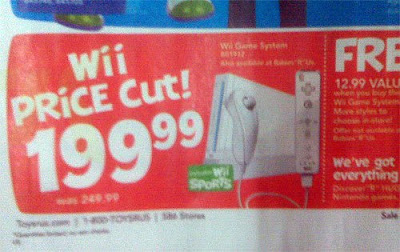 Source: Joystiq, Joystiq, Chart Get! Chart Get!
Thanks to: Some German Guy