Sony really deserves every single word of bad press they get at the moment, I have come to accept now. Why, you ask? Because their executives are rubbish at communicating their product.

Sony Computer Entertainment exec Phil Harrison recently went on record, saying that the PlayStation3 is so powerful that "nobody will ever use 100 percent of its capability."

While that might sound impressive at face value, it is undoubtedly the most ridiculous statement someone can make about a product like this (one that is both so expensive and cutting edge) and is sure to drive potential buyers towards either competitor.

Think about it. It is like saying that a hair dryer is really powerful, but will never actually work at full output capacity. You still have to pay plenty extra for that extra power, although it will go unused, of course. Mind you, Mr. Harrison would make an excellent hair dryer, with all the hot air coming out of him these days.

I think that Harrison should be fired for making such moronic statements at a crucial time for what essentially is a great product. And I would not be surprised to see that happen soon, too. After all, last time I called for Ken Kutaragi to be sacked - and remember what happened just over a week later? 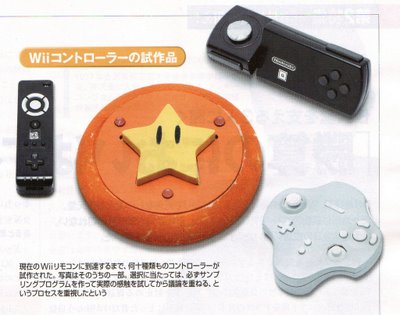 God knows how we would have used that star controller, if it was meant as the main controller, at all. If not, there might be some ideas in that photo that Nintendo will realise further down the road.

The latest and highly anticipated installment in the hit series ´Metal Gear Solid´ will not be PlayStation exclusive, industry insider Daniel Boutros claims. On his blog Noooz, he reveals that an Xbox360 version of MGS4 has been confirmed behind closed doors.

It's coming a few months later than the PS3 game, but it's happening folks.

This is said to be because publishers - including Konami - don't believe there'll be enough PS3s out there by the time the game hits because of the blu ray diode failure issues. (...)

This came pretty much from the horse's mouth, so you can count on this being legit.

This is the second time rumours about MGS4 going multiplatform surface. In late October, gaming magazine EGM wondered if the game was coming to Xbox360. I regard this as a likely scenario, especially since the PS3 is drastically lagging in sales and struggling to get past the million mark.

Consider this alongside the news that a PlayStation3 game must sell at least 500.000 units in order to break even, as Namco president Takeo Takasu told Bloomberg in late November.

According to various sources, Sony has managed to sell between 500.000 and 800.000 consoles by now. Economically speaking, publishing MGS4 exclusively on PS3 makes no sense whatsoever.

Although it should be noted that exclusivity in the games industry has always been a relative term. After all, ´MGS2: Substance´ was released on Xbox only one year after ´MGS2: Sons of Liberty´ came out for PS2. So the real question here is how soon will an Xbox360 version of MGS4 show?

Sales of Nintendo´s Wii console have surpassed the two million mark, according to AMN´s Videogame Charts. Here are their current figures:


The other site playing the numbers game, NexGenWars, paints quite a different picture, particularly for the Xbox360:

Even with the latter figures, Nintendo is not far away from having sold two million consoles. If they can sustain this pace, Nintendo has a real chance of becoming market leader by the summer. But, of course, it is too early to tell until all three consoles are readily available.

Upgraded Wii to be released in spring?

Nintendo may be readying an upgraded Wii to be released in spring, which will cost $50 less and feature more colours, new rumours suggest.

eSports site GotFrag has apparently been given word by a store manager in a 'Toys "R" Us' outlet:

After talking to him a bit, the manager revealed a few things in light of the Wii consumer frenzy. He would go on to state that if they [the customers] would "just listen," they could get a "better system" in a few months.

A "better system?" As he would soon explain, Nintendo will be "relaunching" the Wii console sometime before or at the beginning of Spring 2007. The launch, which is said to see many different colors for the Wii system (as seen at E3), will also be accompanied by a hefty price drop from $250 to $200. (...)

Also note that it is undetermined if the "better system" statement includes technical upgrades to the Wii, as recent rumors have suggested.

While a DVD-enabled Wii has been confirmed for Japan, I seriously doubt that we will see an upgraded console for a reduced price so soon after launch. Also, a store manager would not be in on this, while the big news outlets appear to be clueless.

Perhaps there was some confusion here with Nintendo's recall of wrist straps. Most convincingly, though, I believe that Nintendo - still struggling to meet demands - will not burden itself with releasing more colours, further exaggerating the shortages for everyone who insists on matched accessories. And, finally, previous purchasers would surely feel cheated if they could have gotten a much better deal less than half a year later (remember the Xbox launch debacle).

I have come across a new comment that gives rise to further speculation that Sony will delay the European launch of the PlayStation3 further. Speaking to The Associated Press (via Yahoo), Sony Corp. President Ryoji Chubachi made no mention of the March release date:

Sony also expects to meet its shipment target of 6 million PS3 ready by the end of the fiscal year ending March and will launch its next generation system in Europe as soon as possible, Chubachi said.

Given that all of our previous statements about launching in Europe simultaneously with the US and Japan turned out not to be the case, I would not like to make any definitive statements on that. It’s not my job to comment on hardware supply issues other than to say some very smart people are working very hard to catch up.

The blog later updated the story, quoting Sony officials as saying that the comments had been taken out of context.

A few days ago, though, Ken Kutaragi was quoted as saying that the European launch may be pushed back until May 2007. Again, Sony Computer Entertainment Europe responded to these fresh rumours, categorically ruling them out.

Now, Chubachi´s comments seem to give further credence to the console´s European launch being delayed beyond March.

I will go out on a limb here and state that Sony will not meet March. They might try to launch nevertheless, but I do not think they can rally more than 100.000 units. In my opinion, it would be wiser to delay again and have a sufficient shipment in place.

Also, consider that these delay rumours mostly came from SCEI, while SCEE did all the debunking. This is Sony Japan shafting Europe once again.

EDIT The good people at CVG are citing an anonymous source as saying that the European PS3 launch may even be delayed until September.

The wait is over

Thanks to the nice guys over at K-Videogames, the following ugly mugshot has now been made available on the internet. You might not be able to see it, but somewhere underneath that wild stubble is a happy smile. 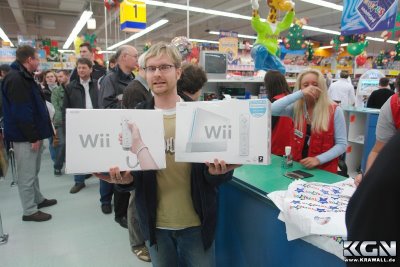 Get a Wii tomorrow - meet Falafelkid

Right now, I am going to have to apologize to all but my German-speaking readers, since this will be my first (and last) post in German. It relates to the only midnight sale of the Wii in Germany. So don´t you Americans or Japanese readers complain! You are playing Wii already ;)

Ken Kutaragi's promotion was already understood as a plot to remove him from daily PlayStation business. Now, analysts believe that this restructuring is the fist sign of Sony abandoning the PlayStation hardware altogether.

Analysts said that Mr Hirai´s promotion to a global role at SCE could mark a critical shift in management thinking, with Sony changing its emphasis so that the current generation of games console will be its last as a hardware manufacturer.

"The appointment of Hirai could be the start of a shift from hardware to software," said Yuta Sakurai, an analyst at Nomura. "I cannot now imagine a PlayStation4."

Mr Sakurai said that Mr Hirai´s new global portfolio puts a predominantly software-focused manager in charge of the company, adding that SCE´s future would be shaped by Mr Hirai´s relationship with Phil Harrison, the president of SCE´s worldwide studios.

Analysts argue that while Mr Kutaragi, a brilliant engineer, was the right man to run SCE as a hardware powerhouse, Sony may now see better opportunities as a pure maker of games.

Now, I am sure we all agree that this view ("I cannot now imagine a PlayStation4") appears to be somewhat rash, even given the ´annus horibilis´ Sony has experienced with the PlayStation3. This may be one lone analyst´s interpretation of the SCE shakeup.

At the same time, bear in mind that this was part of an FT article and the newspaper is perhaps the most reputable business daily in Europe. And considering that Sony´s share price dropped further (while Nintendo gained a remarkable 4% the same day), it is certainly a theory worth considering.

Australian lifestyle and technology magazine Smarthouse quotes him as saying that there will be a PS4, but not until at least 2010. Further, and more immediately, Sony seems to toy with the idea of copying the Wiimote:

Sony will introduce a series of firmware upgrades that will give the PS3 more media centre capability while allowing for the introduction of third party applications and hardware "Such as interactive controllers" similar to the Nintendo Wii he said.