Nintendo to own Japan this Christmas?

Japanese retailers overwhelmingly expect Wii and the DS to be the topsellers in the next few months, according to a survey by Famitsu publisher Enterbrain. The story originates from a German website. Here are what they claim are the results of the survey:

1. Which next-generation console do you think will sell better leading up to Christmas?

2. Taking all hardware into account, which console do you expect to deliver most?

If true, SCEI boss Ken Kutaragi couldn´t care less. At least, this is what he told British trade magazine MCV.

When asked by MCV whether the rival consoles will outstrip Sony’s next-gen machine, he replied simply: “We do not care.”

But he conceded that Sony is still struggling with the production of PS3’s Blu-Ray drive: “Right now, it is an issue, because we can’t manufacture enough blue laser diodes for our PlayStation 3s. But we will resolve that.”

Firstly, the retailers´ opinion is pretty much based on common sense. Sheer numbers speak for Nintendo: Sony will launch with a measly 100.000 units, whereas Nintendo will surely be able to supply a multitude of that number. Secondly, the price point: you can buy two Wii consoles for the price of a 20GB PS3. And thirdly: Nintendo boasts a solid launch line-up with highly original and stunning titles such as Zelda: Twilight Princess, whereas Sony has not even been able to confirm any launch titles apart from Genji and Resistance: Fall of Man, who simply will not match up to a Zelda, I am afraid to say.

So is this good news for Nintendo, then? Well, only partly. Wii will obviously be flying off the shelves quicker than its rival, see above for reasons. What really matters, though - and what a lot of publishers may be waiting for - is the point where the supply of each console can actually meet the demand. This is when a level playing field will emerge and the market, rather than the production lines, decides what product people buy.


As far as Ken Kutaragi is concerned, I am honestly considering whether he is starting to lose it. He certainly seems to have developed a bad case of hubris. His comments over the past year have often been surprisingly tactless ("PS3 is for consumers to think to themselves, 'I will work more hours to buy one'") or simply crazy ("Beating us for a short moment is like accidentally winning a point from a Shihan [Karate master], and Microsoft is still not a black belt").

He has done the PS3 much harm with his poor leadership of late. Most evidently, the last public outings (at E3 and TGS) were nothing short of disastrous, which may be blamed on him. This is surprising, though, because the same Kutaragi managed the PR spin behind the previous PlayStation launches, which should be used as textbook examples in Economics and Management classes.

But apart from PR spin, there are many other aspects to the PlayStation brand that Sony totally delivered on with the first two consoles, which they are badly failing at now: securing exclusive titles, industrial design, solid pricing strategy. This is what Sony has brought into the industry and this is what I have come to value them for. And it´s all in shambles, as far as the PS3 is concerned.

EDIT Amazon Japan have published a chart that seems to plot Wii pre-orders against those for each of the two PS3 versions. Both of those combined rank higher than the Wii total. Although the rate of increase appears to be the same for every system. 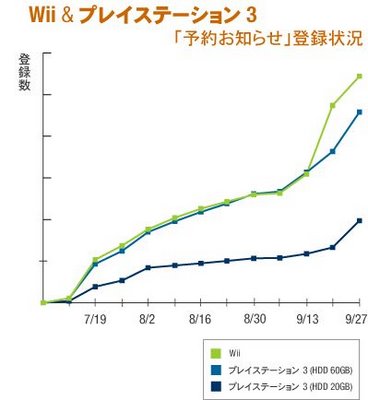 You may remember a similar graph being published in July. This one related only to mail alerts, apparently. So I guess we will have to wait until someone deciphers the Japanese.

This post says it all
the only bad thing is that all these polls are only being held in japan. they should do one also for the US and Europa and then we see the real numbers

Neos are you trying to say that Japan is irellevant? I hope not.

Japan ist still the most important market for videogames worldwide.

Since Japan has a high concentration of big name developers, it is still a VERY valuable market to have influence in.

However, there's no denying that it is a smaller market than America.

Hey guys, Wassup Fal! On a quick note of things, I have noticed through recent years that Japanese developed games are starting to become more of a mainstream and less of a niche. What do you guys think? Oh and I am taking bets that we will see the "Father of the Playstation" be dismissed and replaced by a "reggie copy" LOL!