IGN has had a first look at Ubisoft´s ´GT Pro series´. While the first screenshot doesn´t look very exciting (the game is cel-shaded, which doesn´t seem to come across very well in that image), the steering wheel peripheral does. 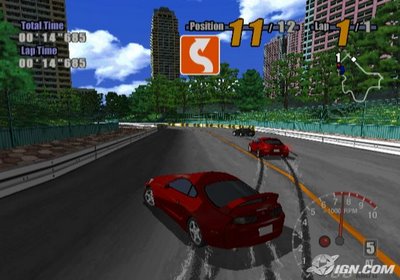 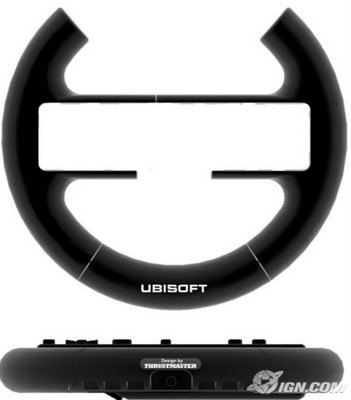 Here´s what the game´s associate producer Tats Myoio told IGN about the looks of the game and its steering wheel attachment:

To enhance the user's driving experience, GT Pro Series will include a steering wheel attachment made by Thrustmaster specifically designed for this game. The Wii Remote will fit into wheel horizontally with all buttons accessible, so tilting the wheel will tilt the remote. The player will be able to steer the wheel just like an actual car!

Source: IGN
Thanks to: Maxconsole

Meh...Honestly the game doesn't look that great, it looks like a PS1 game...

I don´t think that it´s going to suck. I reckon that it will look quite different in motion. I didn´t even recognize that it was cel-shaded until I read that in the interview. And ce-shading is simply quiet a different visual style. Zelda: Wind Waker or Jet Set Radio screenshots didn´t look very pretty either. But the games did have an awesome visual style. Let´s just wait for the first vids.

You just made me laugh out loud - and I actually mean that. Funny. Do you have any ideas for a cheap subsitute for that gun attachment? Tape the controller to a nail gun? Or you could tape it to a broomstick for that new Harry Potter game ;)

This game is a total joke!!
When editor will start to respect n-Fans?? :(
I prefer Splinter cell from far!

It looks a bit underwhelming - evon for a cel-shaded game. It seems like there are not much details on the car or the world-design. It looks like it could be a game for the ds. I hope the peripheral is sold seperately...

hm, so you have to hold the wheel in the air while steering? this is extremely uncomfortable.

and yes, the game graphics look MUCH worse than PS2-graphics.
but maybe thats because auf the quality of the picture.

im so fucken tired of all this graphics critism..wan graphics?take a ps3 or an xbox360 and leave the wii alone..so lame my god..

Did anyone else notice on the side view pic, that a black Wiimote is inserted in the wheel? You can see the d-pad, buttons, etc.

I think you can't rest your arms holding that wheel in the air. After some time, you'll need massage on your shoulders to get another driving session...

don't you think they've thought of that? jesus christ. it's not like they put these things out without fuckin testing them. it'll be fine. i'm sure the thing is light as a feather.

Well Falafelkid, I see you're point, but Wind Waker and JSRF looks beautiful but this game pretty bland, I mean they could improve on the environment and the cars, give it that nice clean vectorize look.

Let's hope this game won't be as realistic as Grand Turismo, since arcade racers are more fun.

This game looks like shit. Meanwhile, I think Wind Waker is the most beautiful game ever made. Even after 3 years no game has come close to its graphics.

^ here this guy is just assuming... wait until you see the real thing then start talking shit....

Well the others have already commented to what you have said Pitendo so no need for me to reiterate. However I will say this; dont blame Nintendo for any games that have bad graphics. You have seen what the system can do (Mario Galaxy, Red Steel, Splinter Cell etc).

Either way I am sure it is early pictures.

Grandmaster B
i totally agree with you.its not nintendos fault if 3rd party games have bad graphics.and i add to your list zelda tp ;)

Lets hope that the Wii will find itself a decent racing title, considering Sony have the highly regarded Gran Tursimo series and Microsft have the excellent PGR, Nintendo definitely need something of similar or superior quality. Though I realize this title probably isn't going to be it.

I seriously doubt these are Wii-pics. They look very much like screens from the Japan-only GT Cube racer.

Or you could tape it to a broomstick for that new Harry Potter game ;)


What broomstick? This is the first I'm hearing of this.

First of all it was originally designed for the Wii and 2nd of all it doesnt have bad graphics. Just have a look at the scene where you fight the boss in the E3 demo for example.

Graphically there is nothing wrong with it.

Although from the screenshot the graphics seem substandard for a new console title, give it a chance in motion. Graphics are an art style btw, just have to point out Killer 7 graphics FTW,(game itself was pretty good too) bring on Heroes Goichi Suda.

Like most people I get annoyed when people downplay the wii's graphical capabilities...But at the same time I can see why they do. For years now whenever a new generation of console comes along the only real noticeable feature is on a graphical level, of course some systems...namely Nintendo's change this. The N64 for example done this to such a degree that the ripple across the pound is still the same ripple for next generation consoles today. So all the PS3 and 360 offer is basicly a graphics upgrade. Now I know that Microsoft has brought fourth XBOX-LIVE and that it has had great success for the company but it hasnt change gaming just simplified the download serive. As has other hardware and software both Microsoft and Sony has brought to the market...like EYE-TOY.

So when Nintendo once again change the formula therefore altering the ripple, gamers are confused on how to think on it other than what about the graphics. You see the fact of the matter is GAMERS, as a consumer dont really know what they want. *QUE the hate* Do you think we would be playing with the traditional two-pronged analog sticks and force feed back if it where not for the creativeness of the people that work at Nintendo? I think not...(fanboy moment)

Wii is set to explode soon and People dont know how to react to the remote and Nun-chuck set up because they havent played with it yet.

On the graphical side of things concerning the wii I dont think that wii is that bad considering that the console is soo small and doesnt even have a fan...Now fair enough wii cant handle the graphics that PS3 can but then DS couldnt emulate what PSP does either...and theres games coming to PC next year that even PS3 aparently cant handle.

ATI recently stated that what we have seen so far from wii is the tip of the ice-berg and id bet on it that wii's visuals will improve just a bit more....but that isnt what wii is about. Wii is about broadening the gaming market to break down the barriers and allow people other than hardcore and casual gamers to play togeather or alone. This is all new and if your a Hardcore, casual or a Non-gamer then wii is for you all...

the graphics aren't that bad... and even next gen it isn't so much of a difference compared to previous gens...

Now if Nintendo doesn't bring HD gaming but their console can keep 60fps running perfectly on its games, forget HD and bring me those graphics, i wanna play a game and not watch a High Definition Slide Show.

This is an easy way to find out what games are coming out for Wii. Just check out the ESRB website.

So this is the calm before the sotrm? Falafel get in here and start hyping people up damnit!

^ that sounds like a great Idea lets jump on the hype train...

HOLY F' MAN!!! ENOUGH with the whole inferior graphics nonsense already! If you want better graphics, nobody is stopping you from spending 2-3x times as much money to get them!

The Wii will have graphics that are better than a Gamecube. That's it. That fact has been public knowledge for over a freaking year already. As for the arguement...STOP!

Back to Blu-ray vs Hd-dvd for a few,....so yah i found out that many blu-ray titles still use old MPEG-2 compression technology while HD-DVD uses a more effecient and better mpeg 4. No wonder it was such a dissappointment. Hd-dvd was nice, but blu-ray was horrible. Man sony, how many f*ck ups are you gonna create for yourself? Does anyone have a list on which blu-ray titles have the NEW compression software?

As for this racing game, the picture looks absolutley horrible. Dark and stupid lookin, but i will not judge this game until i see better clearer pictures and see it in motion and play for myself. Btw, do you guys know when okami is gonna come out? (that cartoon wolf game for ps2)

Less than 24 hours left until the Japanese conference!

You want a hint of the things to come? Here is one for you. DOUGH!

Now that the London event is over, please allow me to elaborate my hint above. Originally, not only Tim Henman and Greg Rusedski were meant to appear on stage, but also German tennis legend Boris Becker. The image shows a baker, the German for which is phonetically identical with Boris´ surname (the English is already pretty similar). Unfortunately, Becker hurt his foot only days before the event and had to pull out at the last minute. His appearance was my hint, though.