There is now a second Revolution ad out, similar to the first one below. Thanks to Raphael for sending me the link. 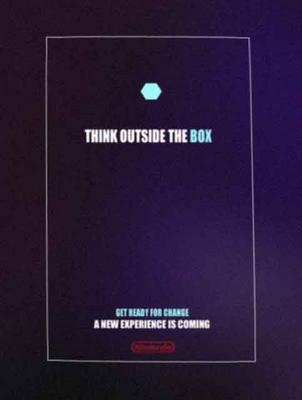 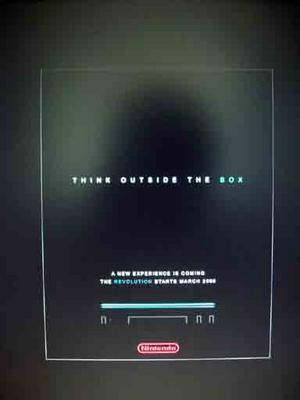 Now, the main tagline is the same as the first one, which seems to suggest that (if real) these posters would still be at approval stage. Below it reads ´get ready for change´, perhaps a tad too similar to Sony´s PS3 teaser poster campaign before the E3, reading Welcome chang3.

However, chatting to Phalanx from Revolutionrumors yesterday, I already started to feel that there was more to the first poster than I had initially thought. Look at the translucent effect. Especially the Nintendo logo seems to glow. That is probably because the poster is semi-translucent and there is a light source behind it. Also, it is clear that the poster is printed out at very high resolution and considerable size. You can tell by the person´s reflection in it and the relatively high resolution of the original. Let´s summarize:

Now any of of these points individually would have meant that a potential faker had gone to a lot of trouble to make sure his little creation would really stand out and be deemed authentic. But given all of these in combination, I simply don´t see how this could be a fake at all. The second one may have very low resolution and does not allow a thorough analysis. But it does further support my conclusion from the first poster, though. Especially poster number one is a far cry from a Photoshop job, it involves professional print jobs and professional display cases. I am not totally convinced, but I regard these posters as authentic.

I believe they are leaked entries in a competition, where various advertising companies prepare campaigns and the winner is given the actual contract. That would also explain the timing, which initially seemed suspiciously early to me.

EDIT Well, here´s a second opinion and from a professional, no less. My girlfriend, graphic designer and 3D artist, whipped this up in no more than 30 minutes:

So here´s my "You couldn´t do that in Photoshop" opinion out the window, I guess. To tell you the truth, I still believe this is real. But the arguments in favour certainly weigh far less than I had imagined. Who do you think is right? Me or my girlfriend?

EDIT Hold on to your horses: There´s a third one now that looks exactly like the first, only this one claims the Revolution will come August 2005.

Now I´m prepared to go on record that a 2005 release for the Revolution is not just next door to impossible, they actually share a room. There´d most likely be no third party titles for such a launch. And that´s not mentioning hardware production and marketing. Lastly, there´s a blurry image using the stylized Revolution front from this ad as well as the latest mock-up controller and ON helmet outlines. The former has been proven a fake, the latter is likely to be one, but here goes:

I´m more and more inclined to move back into the "Revolution ads are fake" camp - and I can already picture my dear girlfriend with that "I told you so" smile on her face that I probably deserve.
Posted by Falafelkid at 12:09 pm

The question is if the second one is authentic or just wants to profit from the succes of the first poster.

The first one looks pretty real, and if it is not, Nintendo should just rip the idea and use it anyway :)

My only Question is: Where is such a Poster hanging around? O_ô

The photoshop is not really like the poster. Nice try but doesn't throw the non-photoshop argument out of the window.

Thanks for the comments. And thanks for the support there, niwre. But my girlfriend hardly spent half an hour doing that pic. It is just meant to hint at what Photoshop can deliver if you set out to do things professionally. My girlfriend could easily have done that, but we just don´t have the time (or energy). So, please consider that it is just a demonstration of what you can do in no time at all.

I cant believe its real sorry. Why should nintendo make a poster yet and who should make took a photo of it? O_ô

Well, MSG. Just imagine it´s a competition between agencies (a common practise in some fields). Then they would have presented their different campaigns to Nintendo. Some of their execs and employees would have seen the posters in the display stands and one of them could have taken a photo. Mind you, I´m not so sure now...

Yeah but also if thats true. Why would on this posters standing: March 2006?
A poster like: "Think outside the Box" maybe can be true, but also with a datum? No... dont think so.

sorry, i didn't mean to double post - it does it by itself

There's one point no-one seems to have picked up on - what's that hexagon at the top of the new one all about?

Where does that one come from?

So it's got the shape of the latest controller on the left, the nintendo on shape on the right, the revolution in the middle. Seems plausible but I think it's fake.

If you r gonna post something have the balls to back it up!

18's thing ain't that interesting. The Japanese is mostly - barely - legible, and it says:

First three lines are identical, which makes me doubt its authenticity.

Yes, yes 18 we get it, that's the shape to the left at the bottom of the poster. You r a FAKER!

falafelkid, I would like to talk to you in private. Would you care to reveal your secret identity to me? Or you could just tell me your email, no dif.

But I would like to talk to you. If you don't want to post your email on this blog, then I'm sure we can arrange a safer place to chat.

Nope, got no AIM. I'll look around for it on the net, but I'm on dial-up now so it might be a while.

Then e-Mail me or we´ll meet in a chatroom.

O.K. what? Want to email or shall I suggest a chatroom?

Go to http://www.chatterhead.net/chat-lobby.html (if you have Java), then make up a username (don´t type in a password, just click on login.) Make sure to come to the Chat Lobby.

sorry, I already sent you an email.

Seriously why has no-one else seemed to spot the hexagon? Has anyone seen anything like that in connection to the Revolution before?

Well, no. But do you consider this one real, then? I don´t think I can anymore. There are certainly fake ones out there (March and August can´t be true at the same time), so it´s best to call them all fake, I guess.

I don't know, I think they could be mockups from a company trying to get the contract for Revolution advertising. In that case the dates would just be placeholders, but the main details of the things accurate. And the hexagon has be seriously wondering, because if that poster is fake, why would the add something that seeminly random?

For any possible conspiracy theories, check http://en.wikipedia.org/wiki/Hexagon. It´s based on Euclid. But this is going a tad too far, I guess.

I guess the first one is plausible and the rest is not...

They are all fakes. Nothing to do with reality ^^

I really am still not convinced they're outright fakes. That's not to say I believe they're genuine advertising - I think there's a good chance these are mockups, results of brainstorming, for a possible campaign.

There's a new revolution silhouette pic @ smoothharolds flickr account - not yet marked private, so have a look.

Not a photo, as there aren't any scratches, specks or dust. Nor are there any compression artifacts or similar, so it looks like it's been made by smoothharold himself.
The pic appears in infendos lates blogpost.

LOL? An Nin-Sider again? Where the hell they are all coming? Do they have the same mother? ROFL xD

Yeah, if every one of these guys was real, then every single one of Nintendo´s thousands of employees would have to grass them up. And that is including Miyamoto and Iwata!

Reggie = Aries
Iwata = Osoko Tanka
But who is Miyamoto? =/

Perhaps the two dates are not for the same thing. March 06 could be a release date, while August 05 could be the release of more information, or maybe the showing of the whole console with a controller and games. I'm still inclined to belive that the adds are fake.

As for hexagons (and conspiracy theories), go here. Scroll half-way down the page. There is a post by ALL_YOUR_BASE (Which I belive is Falafelkid) that contains an "e-mail" from "Deeper_Throat." It mentions hexagons.

Personally, I don't subscribe to the whole Deeper_Throat thing, but I'll put this all out there for those that do.

P.S. Any news on your exclusive yet Falafelkid?

Hi Googleplexer. No news yet, I´m afraid. I´m beginning to have doubts about whether it´s forthcoming at all... We´ll see soon enough. The post on the Nintendo forums was meant satirically. Read my next post.

Thanks anonym. Posted it.

Sorry to be so late, I'd just like to say that if you look around the Nintendo logo and the slogan, you'll see that they have smaller 'pockets' of compression than the rest of the poster. Even in it's scaled-down form, that shouldn't happen. These pockets also do not take the shadowing into account. They could not possibly be part of whatever compression technique was used, because if you look that the top part of the revolution image, you'll see that whoever made this cropped it much closer to the light-blue part of the image on the left than they did on the right. Unnatural discolouration is present in areas too far away from the text to be realistic is also evident.

None of this is obvious when you're just viewing the image from a browser, but if you save it and look at it magnified with something like Paint you can see it very clearly.

I should probably add now that I'm not an image-manipulation expert in any way.