In an e-mail sent to journalists, the company merely said the invited scribes should come to Apple's Cupertino, Calif., headquarters next Tuesday to learn more.

"Come see some fun, new products from Apple," the company said in its invitation. Unlike past invitations, which hinted at which product Apple was targeting, the current invitation includes just a picture of a calendar with only the date Feb. 28 on it. 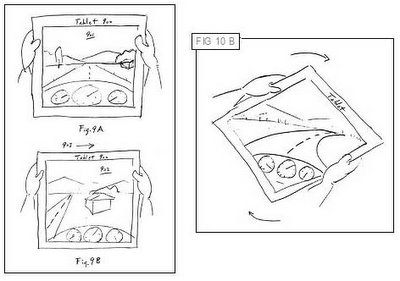 In fact, reading the description one cannot avoid thinking that this screen would make an ideal match for the Revolution, the most portable home console yet:

It’s (...) a wild new video game application for Apple’s accelerometer technology. It provides specific gaming examples of user as a driver and pilot and even provides a glimpse of how the accelerometer will be used in First Person Shooter games.

A user holding the tablet can turn around and see the view looking backwards from a position in a two or three dimensional image or object database as if the user walks into a virtual reality game space. According to another embodiment, a user may perform an inspection of an image panorama where the view in different directions is provided by multiple cameras pointing outward in different directions from a single location.

Of course, this is all pure speculation and there is no concrete evidence of such a collaboration. However, the rumours of Apple and Nintendo cooperating are as old as anything. Sites like Macworld are keen to point out the similarities in the two companies´ business models. This is not to mention the almost identical industrial design exhibited in their products, as shown in a fantastic comparison by Go Nintendo.

In conclusion, next week´s announcement really could relate to gaming in one way or the other (though analysts expect the introduction of two new laptop models, it should be noted). It is highly unlikely that anything Nintendo-related will be announced. Still, it´s one to watch.

EDIT Nothing gaming-related was announced. See Joystiq for details.

Posted by Falafelkid at 1:07 am

My brain hurts... Apple in the console biz? By themself? With Nintendo? Going after Microsoft's blood? Agh! I just want clarity!

Apple has a handheld coming out. It's mentioned in the E3 workshop notes.

Is it coincidence that Iwata uses an Apple Laptop for his speeches?

lack of support sometimes, i guess at least they have something in common.

Interesting, but not likely. It would be hard to hold the controller and tablet at the same time.

wont happen. read up on it. it has been denied multiple times vigorously by apple.

I have always thought that apple and nintendo would be a great match.

When the gamecube came and and had a powerpc based CPU i thought apple would be smart to put gamecube compatibility into a future computer. Thus solving the problem of game support on the mac platform.

Just think if i could use a iBook to play gamecube games. That would have been sweet.

… and -in my mind- I always thought NDS was Nintendo's Ipod :)

Its funny, I don't really think Nintendo will ever work on a console with Apple, but there does seem to be a lot hinting at just that. Its kind of like the ON video in that regard...it is very unlikely yet there are too many coincidences surrounding it to dismiss completely.

Well, if Nintendo turns around after the Revolution is out in stores, and releases a new version on an Intel processor, and at the same time letting us all know that the system was built to support both types all along... Then we will know for sure that something is up.

if nintendo releases info saying we are working with apple then we will KNOW sumthung is up.

Interesting, but not likely. It would be hard to hold the controller and tablet at the same time.

The tablet is the controller.

wont happen. read up on it. it has been denied multiple times vigorously by apple.

falafelkid, are you saying Apple could actually join the console wars and compete with the Revolution?

However, it is clear that their patent is a gaming peripheral. And looking a it, it would make an excellent controller for the Revolution. But that´s it.

At best, this is Nintendo´s last secret, as unlikely as this might be. At the very least, it´s good food for thought as far as innovative gaming peripherals go.

Hum, I don't think that what is going to be announced on the 28 from Apple is related in any way to Nitnendo. I love both compagnies and they could deliver killer apps and hardware together.

It still could be game-related.

But, my best bet is on one of the following:

2006 is one of my most exciting year for new tech stuff in a loooong time. Both Apple and Nintendo are going to deliver BIG this year.

There has been a lot of hints/rumors that Nintendo would enter the movie-industry. As you probably know the chief of Apple is also the founder of Pixar. So a deal with Apple could also mean a deal with Pixar. I know ... i know this is very far out :D

on next-gen.biz there is a good interview with Perrin Kaplan.

Apple need to create a portable which allows you to download games to it. Like itunes there should be a cost to download certain games. It should be called iPlay and feature ipod music and movie playing. it wouldn't be to compete with ds or psp, it's kinda like xbl market place and xbl arcade.

The reason mnbgqhj why the Oakley Frogskins can block the UV ray is that the lenses are coated with a layer of special film. Such Oakley Frogskin can block and absorb the UV ray as well as some visible light Cheap Oakley Sunglasses at the same time, which will reduce the transmittance of the lens. Therefore, the superior-quality Oakley Jawbone have strong resistance to the UV ray. Moreover, the coating on the lens is relatively hard and not easy to be abraded. As for how to determine whether a pair of cheap wholesale Oakley Jawbones is with UV protection function.