A guy called George over at the Moz La Punk forums (and just about everyone else) has posted the following pic of the Wii console with the front flap open. 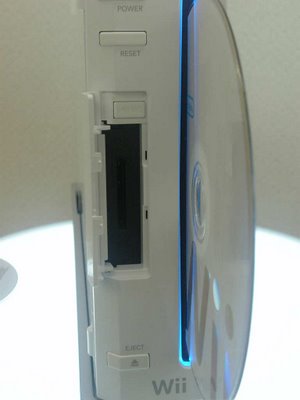 It appears that there is the SD card slot that Nintendo has already confirmed and a button that reads ´Sync´.

The front flap has been the source of much speculation over the recent months. That was why I asked Nintendo president Satoru Iwata himself when I interviewed him at this year´s E3.

Wii: Definitive speculation: "Is there anything else?"

Wii: Definitive speculation: "Okay, but why is it closed?"

Satoru Iwata: "No, unfortunately, no great deal. It´s just that it´s not fancy to show off the memory card stuck in it."

Now, while Iwata could well be lying to conceal a last secret that they want to keep under wraps for now, I don´t trust that photo either. That button could well have been photoshopped in (or at least the writing could be fake). After all, why would there be a sync button on the console? It would only make sense on the Wiimote (just like the Xbox360´s sync button is on the controller).

Falafelkid you were at E3.
I saw you at the conference.
How about some fresh infos?
Also what about the kits?
You claimed they were final but a Nintendo pr rep. said they werent?
So whos there to trust if I may ask?
Also you said that MP3 was a marked improvement over Gamecube which makes me wonder if you have actually played the predecessors and if so can you tell what the differences were?What was improved exactly?
Last but not least were you able to uncover information regarding the GPU?

I dont even believe you talked to Satoru yourself. Prove it.

He's Falafelkid, of course he talked to Iwata!

Also, to anyone that went to E3 and played the Wii Music Drum demo: How did you control the foot pedals?

There was a rumor going around before this image surfaced of a guy who was packing up the Wii's when E3 was ending and he opened the flap and said it was just an SD Card slot and a SYNC button. I'm afraid that's all there is.

Hey, has anyone forgotten about Oskso Tanska and his nintendo-revolution blog (which obviously was a fake to begin with)

I think it's now time to put his blog from the "bad" to the ugly.

Ha...revolution will be HD-DVD. Yeah right. 360 doesn't have an internal drive yet, why would it be?

And yeah, I think that button was photoshopped too. Why would there be a sync button insted of an eject button, let alone anything else?

Just another far-feched rumor. Maybe. Perhaps. I might have to eat my shoe if i'm wrong tho.

this blog is becoming smaller and smaller with less readers!!, 2 months before the E3 this was like the best blog ever news and interviews where everywhere ppl gave a lot of ideas BUT NOW is like dying ! and you are just directing it to its helpless fate!!!

you give news like once every 15 days!! and the news arent even worth it !!! this flap u just took the pic of a guys that posted it here! and now u come with this mysterious interview that nobody has ever seen talking to Iwata over this thing and just 3 questions!!!! and the answers dont even seem to be from Saturo!! they are simple not like he always talks in a wise way of explaing things !! i will kinda ask for prove!!!

if i didnt know u i would say that u made it up!!! plus ok that u have a lot of work , videos, etc etc but that doesnt mean like u have to take half a month to post a worthless piece of info like this ! but i would understand if and only if u are in a NDA.!

Falafel I think there is a very easy explanation for the sync button, DS.

I was just wondering Falafel what would become of this blog after the Wii launches? Will you begin speculating on Nintendo's 6th home console? Maybe on the nxt Gameboy or DS?

On the other hand you may decide enough is enough and just close it down which I think would be a shame... This blog used to have a real sense of community and we bounced ideas off each other like no other site or blog on the net. If we could recapture that after the Wii has launched maybe we could star researching what technology will allow in 2011/12 and try to figure out where Nintendo might head in the future... Just a thought.

from reading other ppls comments a SYNC button is some wireless conection thinggy? sory but im nt fimiliar with it so im jst commenting 4 fun

And what about *syncing* and physically release all the removable media, like the SD card itself?

You don't need a button to release SD cards, you just pull them out.
The button is real, because I can tell from some of the pixels and from seeing quite a few shops in my time :)
Noticed that even the flap has the right form to cover the button?
It will simply resync the controller, not more, not less.
If the Wii wouldn't have this button, you would be fucked up when losing connection, since any other function can be done in a menu.

You need to be sure that your removable media is "unmounted" prior to ejecting it. As far as we know, the WiiConnect24 service would be able to write to any internal/external media at any time, even in background, so a button for "unmounting" the media (sorry for the Unix terminology) seems useful here.

This is not the classical "Writing to memory card, do not remove it or turn power off..." case, since writings can be done in the background.

Hello my name is gabi garbe i am Falafelkids sister and now in charge for Definitive Speculation.Unfortunately my brother is very busy rightnow and unable to keep things flowing at a stedy pace due to various production tasks.
He asked me to run the site for him during his absence and even though my knowlege is kinda limited I happen to
know things that could interest you since Im directly linked with many Industry seniors publishers and even
developers alike through my connections and friendships.
If you got any questions regarding Wii or Nintendo in general feel free to ask and I will get back to you soon.

@Jon Agirre
You think the normal user knows this?
Every card reader I've seen has no physical lock for SD cards, so this won't be different.
For the writing it's easy:
Don't write to the card automatically.
Mount the SD card read-only and only if you move something from the flash memory to the card, it's mounted writable.
The background writing could be done in blocks, waiting until enough data is cached. A LED would warn the user, when writing is in progress.
External HDDs wouldn't need this, as they are unlikely to unplugged under normal circumstances.

You don't need a physical button to save data. It would also just copy everything. Managing it through a menu is much better.
Having no way to resync the controllers is a real problem, not missing a backup button.

My first question: Do you know anything about NURBS in Wii?

Glad to have you here, Gabi.

Hey, I know, the sync problem in controllers needs to be covered with some sort of button, but I'm also concerned about syncing the secondary storage.

I can't see this problem that trivial.

yep there is also a sync button in the xbox360 itself

The SYNC button is there for ANY BlueTooth enabled device. Perhaps the last big secret is BlueTooth connectivity to other types of devices?

I haven't seen any Wii games to date except Wii Sports that make use of the controller as they are supposed to!


No swordfighting in Zelda with motion?

No jumping in Mario Galaxy with motion?

No fast turning with motion in Red Steel and MP3?


It makes me wonder what the heads at Nintendo had in mind when they first created it!
Remember the TGS trailer where the girl moved the controller up and down to illustrate how Mario would jump or how they swung the controller to illustrate the sword fighting in Zelda?

What happened there?
Thats how its supposed to be,isn't it?
Why did they scrap it?
Shaking the controller to collect coins and to defend flying projectiles?that is all?
Thats how it was intented?
I can hardly see a breakthrough with that kind of approach!
Remember its Mario,their flagship title!Nintendo always builds their gameplay ideas,mechanics,controlls around their flagship titles!
Come on!Shaking?Thats hardly fresh!


I want the damn thing to do what it's supposed to do or what one would think of if one sees such kind of device in the first instance!
If Nintendos ways were strange ever since N64 I think they have now reached new heights cause this time around as it seems they have the potential in their hands in the truest sense of the word to revolutionize controlls but somehow they refuse to make use of it as they are supposed to for inscrutable reasons and thats a shame.


Anyway,
This is just a minor dissapointment!
I shall overcome it!

Obviously, anyone pretending to be a family member of mine will have their comments deleted.

She proved herself fake with her answer to my NURBS question. I think NURBS use in Wii hardware was recently confirmed by Game Informer.

Nice to have you posting here again, Andreas.

"I think NURBS use in Wii hardware was recently confirmed by Game Informer."

Oh, for the love of all things holy, PLEASE STOP WITH THE NURBS!!!

It's just a MODELLING tool for 3D apps. It's also been rendered useless with the advancement of Sub-D modelling in all the major packages. There will be no real-time NURBS - in fact it's pointless to do so.

They're a bitch to texture, pain in the ass to rig, and overall just inferior to sub-d polys.

I mean, do you even know what you're talking about? Nurbs this, nurbs that...STOP IT. You sound like a kid you learned a new word but doesn't understand it's meaning.

You put memorycard there and it syncs the data to wii. Or something like that. yes, it might be like "I just bought new controller lets push this so it "installs" it to wii"

The pic is not fake.

Its official! IGN said that SYNC button is for searhing controllers.