My god, what a productive Sunday this is turning out to be! Thanks to Raphael, we can all enjoy these six beautiful screenshots from this Chinese DS site´s forums: 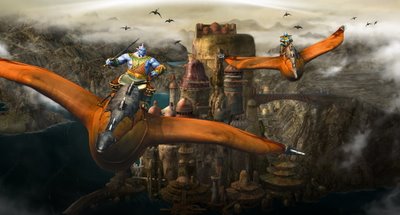 According both to GoNintendo and their source, German Nintendo site PlayWii.de, these are supposed to be the first screenshots from a new Miyamoto IP. However, no such reference can be found on the original forum (which seems to be down at times).

The original thread is entitled 个未定名的游戏,游戏概念图, which approximates (according to Babelfish) to ´Has not chosen a name game, game concept chart´.

Further below, the topic creator writes: 游戏概念图, 应该不是即时演算的,不过感觉不错, which is translated as ´The game concept chart, should not be the immediate calculation, but feels good´, probably meaning that they are not real screenshots, but what the studio is aiming for.

Other people commented on the screenshots thus:

从古堡到现代都市，差距有点太大了
- ´From the old castle to the modern metropolis, the disparity a little too was big´

飞空艇都有，典型最终幻想
- ´Flies the spatial ship all to have, the model finally fantasized´

是相当期待的游戏
- ´Is game which quite anticipated´

原来是这个游戏
- ´Originally is this game´

I know that Babelfish turns every sentence into Yoda-Speak, which seems to fit the Star Wars feel of the screenshots. But some of the sentences are clear enough to suggest that this is a game that has been anticipated for some time. In this case, it couldn´t possibly be anything to do with Miyamoto, because there has been no word on a new IP - and who could anticipate something that hasn´t yet been announced?

In my mind, it can´t be a Miyamoto game. It may, however, turn out to be for the Wii, after all. Since it was posted on a DS site´s forum, that is actually rather likely.

EDIT The images are indeed from a Chinese CGI movie called ´Thru the Moebius Strip´. Thanks to Fyter for pointing this out. You can visit the movie´s website here. Some of the scenes from the alleged Miyamoto screenshots can be seen in the trailers. This could leave the whole story fake. However, it does not explain the comments by the people on the Chinese forum. They were clearly recognizing a game. Perhaps there is a game in development alongside the movie?

I hate to say it but this game looks far beyond Wii's apparent capabilities or any other next gen console. Plus this game looks strikingly like something I had in mind for a game myself. Meaning its more than likely someones wild idea. Color me surprise if this ever materializes.

As in the link I just posted, these are captures from a Chinese CG movie.

It looks like No End soon, they even have the big guy with that hat in it. On that big flarfanougan creature. I say No end Soon.

游戏概念图, 应该不是即时演算的,不过感觉不错
Game concept art. I shouldn't be making any immediate judgements based on this, but it looks pretty good.

从古堡到现代都市，差距有点太大了
The difference between the castle and the modern city is pretty big.

原来是这个游戏
Oh, it's this game

Yeah, these are clearly captures from the Chinese CG movie. CASE! CLOSED!
-Mnt

CG Movie or not, I would like to see the picture from the NoEndSoon final post. I still wonder about it, even though the game was proven fake ages ago. Anyone have it?

infortunately it is from a CG movie "moebius".

So Falafelkid GS forumer here, where are these comments by gabe newell, dennis dyack et al that you mentioned at E3 about the Wii, you said that you'd get them to us.

They're not "clearly recognizing a game". I just read through it. It's exactly the same stuff you'd get if this were posted on an English board.

原来是这个游戏
Oh, it's this game

So how do you explain this comment? It does seem to be the person recognizing the title.

Where are these comments by gabe newell, dennis dyack et al that you mentioned at E3 about the Wii, you said that you'd get them to us.

I will, please be patient for another week or two. I am terribly busy at the moment and we shot almost twenty Betacam tapes at the E3, so it´s some task to transcribe those interviews.

By posting this, you gave us a proof that you don't know anything more that us concerning Wii, and I thought you knew something, what a desapointment, so long Falafekid.

That's easy to explain. The Chinese word "yuanlai" has no direct equivalent in English, and is a marker of tone which can be translated in a variety of ways. Having read through the posts there, it looks to me like that previous translation is a bit off. I can't think of a way of expressing the comment in English that fully captures the intent and meaning, but if I do, I'll let you know. And it's not even clear whether the term "youxi" (game) here is referring to the "game" mentioned in the post, or in the figurative sense (in which case, the comment could mean "Oh, we're playing this game again," ie not this shit again.)

Even if that comment was translated correctly - which, again, looks unlikely to me - that's the only one that has any indication of recognition.

By posting this, you gave us a proof that you don't know anything more that us concerning Wii, and I thought you knew something, what a desapointment, so long Falafekid.

In fact, you just proved that I do know something you don´t. Grammar, for a start.

Also, if you expect Aries-style predictions here then you are a fool and in the wrong place. Do check the bad and ugly blogs sections in my link list. You won´t be missed.

A woman, especially, if she have sjijfj88 the misfortune of knowing anything,
should conceal it as well as she can.
Cheap Hats