Yes, the launch date debate has received new cannon fodder. Let´s tear it apart. There´s an alleged ad making the rounds through various forums that Game On picked up on in his blog. Here´s the picture: 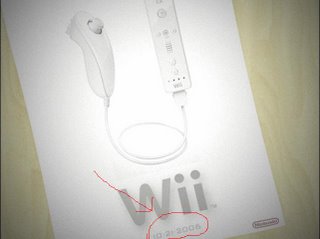 Interestingly enough, a lot of commentators are seeing the poster as confirmation of the October 2nd launch date. Maybe they are all still dizzy with Nintendo´s recent press release. I myself can only make out a date of October 21st 2006.

There are two questions to ask here. Firstly, is it real? And if it is, does the date relate to the system´s launch? It´s most likely that the ad already fails the first question. But even if it doesn´t, the date may relate only to a pre-launch event, not the launch date itself.

The image shown doesn´t show the ad up as fake, that´s for sure. It´s the most recent Wii hardware image, used in the first print ads that cropped up.

the quality of the entire image doesn't look all too good. so that may raise some confusion, but judging from the look of the ad, it's most likely real. as for being a launch date or date of some big event, beats me. just mark your calendars and hope for the best.

Slightly off-topic here, but I just did a thorough revision of the links, adding a whole number of news sites, forums and blogs.

Revising teh bad and ugly blogs section, I was thrilled to find out that there are only two active blogs in those categories left. Talk about a victory of reason over madness!

Sure hope not. That's three days after my birthday.

Did you know my birthday falls on the same day as the NES was released in America? Guess that makes me Jesus, huh.

maybe they have decided to release the controler combo along with some new game now - for the GameCube?

not that many developer that have a chance to actually have a qvality time with the new input. They do now have the chance to test it. Eventhough they need to pay extra for it...

Zelda was going to be release for GameCube also right? So what can stay in their way for releasing another game like erm...Warioware before it?...

wouldn't it be good for them to let gamer have their hands on it before the heavy game titles hit the Wii/GC ?...

just some lose thoughts I had when read the post. ^^*

It could be real, but then again there are several traits that make it appear to be faked.

First, there is some kind of strange rainbow "swirly" below the date. I don't know what that could be.
Second, the image of the controller and the "Wii" title have some comparative discoloration, along with a 90 degree crop line that a professional ad would not have. This line appears when when two shades of white contrast from using two separate images. Even an amateur photoshopist would have been able to blend the two whites along the line, or adjust the color levels to make it match.
Third, there seems to be some "haze" around the controller, which is usually an indication that an image has been blown up. Nintendo would have access to source images, and would not have blown up a jpeg that was too small. Finally, if a person really had a real poster, wouldn't it be wise for that person to, at least, attempt to line the poster up with the camera frame, or is the person trying to hide photoshop signatures? It's obvious that a flash was used, so the person couldn't have been trying to "sneak" a camera shot from an inside source.

if this is true, than i was right with the whole 21st James Bond film theory (and why they mentioned it in their press release).

I just don't see Nintendo breaking the tradition of launching consoles on Sunday in the U.S. I therefore consider both 10/2 and 10/21 as impossible release dates.

I hate all the people that think they know what photshop looks like. I've seen plenty of real pictures and plenty of people claim to know photoshop and say its fake. I have also seen plenty of photoshop work and everyone thinks it's real.

Im not saying that this photo is real or fake, I haven't had a chance to study it yet. When I do, I tell you guys what I think.

This was submitted in a contest to make fake Wii adds. Logically, the date is fake as well.

Sure hope not. That's three days after my birthday.

Did you know my birthday falls on the same day as the NES was released in America? Guess that makes me Jesus, huh.

Who gives a shit. I get tired of people bringing their gf's and birthdays into things. The only one who cares is themselves so why bother. Nothing personal but really who cares.

Anyway I agree with you Dakara. I dont know how can tell much from that pic. (not that I enlarged it or anything) but still.

Over this years, the mbqngta normal look on Oakley Sunglasses Cheap design has become tweaked in Half X Oakley addition to altered, but this Oakley Sunglasses Discount straight in addition to strong Sale Oakley Sunglasses wrinkles remain to make certain Oakley Jawbone look eminently eternal and create elegance to help any hip wardrobe. The description Oakley Stpl Jawbone these appealing sunglasses need to have captivated people, right! And Half X that you are currently on the lookout for a acceptable store that has you this widest offering of Oakley Sunglasses Outlet at hugely competitive premiums.