Analyst firm DFC Intelligence is at it again. These are the people who recently asked Could Sony go from first to worst and their answer to that question was something along the lines of: ´Hell, yeah!´

Now, the Sony-bashing continues in an article entitled The Fight for Number One in Video Games. Here´s the beef: (formatting is mine)

For the past ten years Sony Computer Entertainment (SCE) has been the king of the video game market. (...) DFC Intelligence has always said that as the dominant market leader, SCE was largely in control of its own fate. Microsoft and Nintendo had to hope Sony fumbled or significantly changed its strategy so that they could get an opportunity to capture some of that PS2 audience. Now it is clear Sony is handing its competitors a golden opportunity.

DFC Intelligence has just released a 600 page report with our latest forecast for the interactive entertainment industry. In this report we predict several different scenarios for the individual game systems. (...) Two things are clear: 1) the high price of the PlayStation 3 is going to slow overall industry growth, especially for software and 2) if Sony does not change its current strategy for the PS3 the system will probably end up in third place in installed base. Microsoft and Nintendo have been handed that golden opportunity and both companies have a chance to make their systems the market leader. (...)

We think the company with the biggest opportunity is Nintendo. With a market leading price and a compelling mass market message the Wii has the opportunity to be the market share leader in all major regions. (...) By letting Sony and Microsoft split the hard-core teenage/twenty something video game marketplace, the Wii could end up number one in market share for the next generation.

An interesting calculation undertaken in the article is the following, conerning the PS3´s price point:

At 600 euro, the PS3 would be more than 35% of the monthly household income of a family in Valencia. Combined with the 2000 euro for an HDTV that could take advantage of Blu-Ray and four games, the total cost could top 15% of a family yearly income. On a per person basis, that would be almost 40% of an adult Valencian’s average income. Consumers in much of Europe (and North America as well) simply aren’t ready for that type of expenditure and success for Sony will require that 1) they can keep the PlayStation 2 business alive and slow consumer adoption of new systems and 2) they can make the price more affordable. (...) Even under the best case scenario the PlayStation 3 has a much lower installed base than the PlayStation 2. Under the worst case scenario the bottom falls out for Sony’s market share.

Sony is undoubtedly in a difficult position. They have allowed their biggest rival to launch a year early. A huge mistake, since 5 million people already own an Xbox360, as Microsoft claims. Those sales figures are not too good, but they certainly aren´t bad either. And consider that most of those buyers might have considered a PlayStation3 (and I mean any PlayStation3, really) a viable alternative, had it been available at the same time. But it was not to be - and Blu Ray is the main culprit here. Incidentally, Blu Ray might spell even more trouble for Sony, if HD-DVD should gain the upper hand (and this battle is still far from decided).

So Microsoft´s product is out of the door already and an aptly titled ´killer app´ for it looks set to be released at the same time as Sony´s new console. If anything, the Xbox360 could put a dent in the PS3´s sales figures, not the other way ´round. So, what about Sony´s other competitor? Nintendo doesn´t even claim common ground with Sony, their console costing a mere third.

And while Nintendo has been getting plenty of good press since E3 2005, the two pieces of information that brought the PlayStation3 onto the news agenda recently were the half-year delay and the ridiculous price tag of $600. And I already called the PS2 a ´PayStation´ back in 2001.

Microsoft´s suggestion that buyers should rather spend that amount on the two competitor´s models instead is, of course, plain madness. You don´t plug a competitor in a market of three. But that madness started with Sony´s price tag, let´s not forget that. And, surely, early adopters will have to skimp out on software. This is Sony shooting themselves in the foot - with a bullet to spare for every one of their third party partners. Unless Blu Ray turns out to be a great success, Sony could be flogging a dead horse and can rely on nothing but their clever marketing, which has also gone downhill of late.

Sony Corp. shares over the past 3 months: (as traded at the Frankfurt stock exchange) 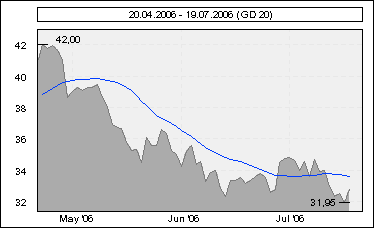 Sony Corp. shares over the past year: (as traded at the Frankfurt stock exchange) 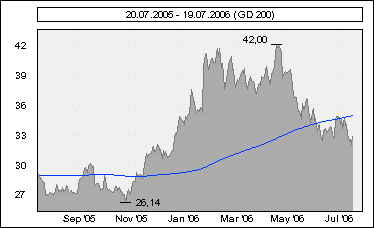 Sony paid a relatively minor penalty for the PS3 delay announced March 15th (a delay that was to be expected), the announcement of the price tag at E3 proved to be the last straw. To make it absolutely clear: Sony is in trouble.

The DFC analysts, however, not only agree with this assertion. They now appear to assume the position of a doombringer. They have made up their minds and cynics may argue that they are turning analysis into self-fulfilling prophecy.

Their author David Cole seemingly plans on publishing an article entitled ´See? I told you so!´ in about a year´s time. Alternatively, it could just as well be called ´Remember where you heard it first!´ - you get my point.

In conclusion, I would urge readers to take concerns about Sony´s future seriously. Just don´t underestimate the weight of the PlayStation brand. The PS2 is still the console with the largest installed base - at around 100 million units worldwide. This is both a great source of revenue for the company, as well as an ideal bargaining position.

Yes, their market share is almost certain to slip, perhaps significantly. But don´t expect Sony to be pulling out of the console market in 2007 (and I don´t think DFC would go as far as to suggest this). SCE is pretty much the only cash cow that Sony has left (after the demise of both their television and walkman divisions). So this market will see Sony fighting for sheer survival. And, in my opinion, they will manage to cling on, if not to the top spot.

EDIT Now Business Week is joining in the fun. Here´s what an Enterbrain analyst (publisher of acclaimed gaming magazine Famitsu) told them:

One troubling sign already indicates that the PS3 might not be quite the hit Sony expects. Game makers are steering development resources away from Sony and toward games for machines from Microsoft and Nintendo, says Hirokazu Hamamura, president of Enterbrain, a game-industry researcher in Tokyo. At its autumn games preview on July 13, for instance, traditional Sony ally Electronic Arts spent far more time showing off innovative Nintendo games than it did titles for the PS3. EA announced six Nintendo Wii launch titles and showed long working demos for two of those. But it offered only a short clip of a car-racing game for PS3. EA says it's still testing the potential of the PS3. "Many developers think the console's initial high price will lead to slow sales and are holding off on creating games for Sony," Hamamura says.

Still, there has been no hard evidence of development resources being relocated away from the PS3. The paragraph is not totally clear on this. Has EA reduced PS3 budgets and allocated them to Xbox360 or Wii? I don´t think that is what is being claimed here. If it is, I would like to know the concrete project before I believe it.

Posted by Falafelkid at 3:58 pm

interesting thanks falafelkid, now what's going on with those quotes from gabe newell, dennis dyack et al at E3?

The blog is Wii definitive speculation not more PS3 bashing. I am sick of the bashing and it has to stop. No I am not a sony fanboy, I have been with nintendo all my life but after months of listening to the same bashing I think enough is enough and I think you should know better falafelkid.

After months of listening to the same bashing I think enough is enough and I think you should know better falafelkid.

I see you haven´t been busy reading the post. I suggest you do so before commenting. No hard feelings, but I do not actually agree with the analyst. So, please, read it.

now what's going on with those quotes from gabe newell, dennis dyack et al at E3?

They will be forthcoming soon.

However, I just spoke to Gabe Newell briefly (and informally). Just to make this clear, there will be statements from:

Whether I can post actual videos or whether I can only transcribe their comments will be determined next week. Then my boss will be back and it´s up to him to allow me to do so.

Falafelkid, statements about what? The PS3? Wii?

Hi Stabby. Wii, of course. I asked all of them (among other things) about what they thought about the console and it seems (as far as I remember) that Lombardi and even Hollenshead and Bleszinki seemed to at least look somewhat favourably upon the console. I certainly did my part to assure them that Wii is ideal for FPS titles.

So it would seem that Wii and x360 real competition will still come from PS2 for the foreseeable future then.
I, like most gamers, want a PS3, but yes, its the excessive launch price that has put me off. Reckon i will give the system two years, hopefully a good price drop and machine revisions would have taken place by then. Until then its Wii all the way.

....also i forgot to say the last thing i wish to see would be the playstation brand disappear. Competition etc etc...


....and stop whining about the E3 interviews, most people have a living to earn outside this blog, yeah.

Just gotta say i've followed this blog for ages and i love it ;P

Falafelkid, your a fucking genius. One of them might actually come up with a cool idea because of you :)

yet another excellently written article, falafelkid. it's so nice to have you back.

oh, and shut the fuck up, zerorules44. thanks.

Just a side note on Sony's market share and future problems, if $600 is going to strain even an average Spanish family, then what odds does the PS3(or the 360 for that matter) have in the developing world? Countries like India, China, and Brazil are just now beginning to be felt in the video game world and something tells me $600 video game machines with "under $100" games will not be selling very well there. Even Japanese video game fans are balking at that price, that should really tell Sony something.

In your edit Falafelkid, your quote from the Famitusu editor mentions that EA has announced six launch titles. Are those six titles really launch titles or do you think he just misspoke?

FIRST POST of the comments ANONYMOUS HERE. Just wanted to say thanks and keep up the good work! Loved reading this blog since E3 2005