September 14th is the day, after all

We all know about the NOA event taking place on September 14th. Now, there will be a Nintendo of Europe event in London the very next day, on September 15th. GoNintendo reported about it first, I believe. And I have also received the invitation since. 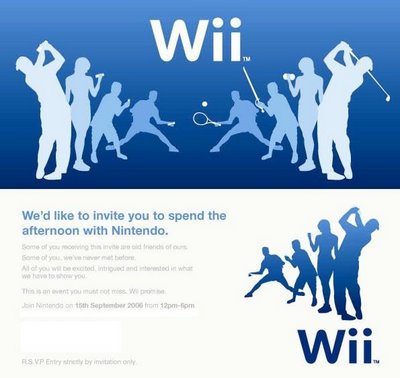 Also, I have made some enquiries and it seems that there will not be such an event in Japan. Consequently, I am forced to change my mind about when the launch details will be announced. I now believe that the two events by NOA and NOE will break the news, after all. I do wonder, though, when the Japanese launch details will be announced. NOA might have Miyamoto and Iwata participate via videoconference.

So watch that countdown at the top. That is when we will find out. Also, Nintendo really do have another surprise in store for us, which will be revealed at these events. Just how big that surprise will be, I do not yet know. But stick with this blog and I might be able give you some indication soon.

Finally, Makerofdust on the NSider forums alerted me to a Swiss online store that started its Wii pre-orders today. When I called them this afternoon, the consoles had already been sold. Their entire first batch was sold out within four hours. Just how many they had been allocated they wouldn´t say. But they said it was quite a number. By the way: their asking price was 399 Swiss Francs, which converts to $320 or €250. Just thought I should give you some positive news to counterbalance the rumours of production line problems.

Wow! You're really on the ball today!

Thanks for personally confirming the European Sep. 15 event, Even with the scans I wasn't sure about it, but now I feel comfortable with it happening.

falafel any persona guesses?wii in november here?sooner or later?and is it true that there is one more secret?

^ Fal has stated that his source has been saying Nov.12-16 (Something around there) and I imagine that wouldn't change.

@ the secret thing, did he not just say that there was another?

Yo Al Falfa, I was wondering if you can give a guess on the secret, give a couple guesses... I know you know the secret! :)

Who told you that there would be another surpise for the Wii falafelkid?

Any other hints you can give us? Thanks for looking out!

Nothing in Japan? I'm really shocked!

@ Metaldave, Perrin Kaplan at E3 2006 told Matt C. (IGN) video interview that their will be more surprise and also for HARDCORE GAMERS to keep their eyes on nintendo

Some pre order info for the readers here in the U.S. FYE, a national music and movie store has begun pre orders for the Wii. I went to my local store on 8/25 and I was first on the list! They require a $50 dollar deposit to reserve a console.

im glad that this whole 'last secret' thing is back. it was being talked about awhile ago but never came to anything. but im sure this time its gonna seep out.

As for the guys wondering about if the Wii would be manufactured in the same factory as Wii it is more than possible but probably more than unlikely.

I would say more manufactured by the same company than in the same factory. Many phone brands for example are manufactured by Taiwanese companies in China factories and they have different plants in various cities. The bigger the manufacturer usually the more plants that have.

The only thing I doubt is this guy getting access to the plants. In China it is quite possible.

Nintendo have working samples. These samples have had their final moulds done and insides and work. Most likely the samples were done by the manufacturer who is doing the mass & final production.

BTW bring on the last secret!

I preordered my wii on www.wog.ch! The Release Date they mention is only a good guess as they say. But it's nice to know that i get one of the first Wii in Switzerland! :-)

What exactly has you believing that there will be another "surprise" afterall?
Have you been told so?
Is it game related?
New games being announced or what?

I preordered my wii on www.wog.ch! The Release Date they mention is only a good guess as they say.

Yup, they printed those flyers in July already and the release date mentioned on them (mid-October) is a complete guess (and a really old one at that). Now they believe the system will launch around November 10th, judging from release dates on third parties´ launch titles.

Cube3 took this news at www.gamefront.de

These date begin to be very interresting.

Hey Falafelkid, check this out:

Pretty good post. I just stumbled upon your blog and wanted to say that I have really enjoyed reading your blog posts.Any way Ill be subscribing to your feed and I hope you post again soon.