There are more rumours that Wii will use an advanced form of speech recognition, converting speech to text, while also translating the volume and tone of voice.

This rumour dates back to a patent found in early February and resurfaced now on the IGN boards´ Insider section (registration required), where a member claims that this will actually be used. Here´s a summary, courtesy of the NeoGAF forums.

Voice communication will be via wireless, head-mounted microphones. (...) Some peripherals for the DS will be compatible with Wii and vice-versa. (...)

The system works using an advanced voice recognition system which Nintendo has been developing for several years. When a user speaks the sound is converted into on screen text and sent to the other players. However, rather than just plain text being sent the system also picks up the tone, pitch and volume of the voice and translates that into colour, font size and character set.

For example, if a player shouts ‘I win’ loudly into the microphone the on screen text may be all capitalized, and in a large red font; conversely if a player speaks quietly the font may be a pastel shade and smaller. This system also allows online voice communication to be easily censored by the user. 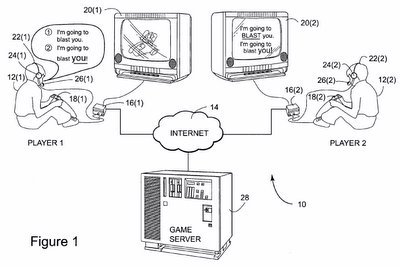 This patent relates to speech being converted to text, depending on how the words are spoken. Shouting may be visualized by capitalized, red letters, while whispered words may be shown in smaller font sizes and in more subtle colours.

Recently, another patent was found, entitled Video game voice chat with amplitude-based virtual ranging, which specifies that the loudness will also determine the reach of the message:

In one example illustrative non-limiting implementation, the amplitude of a game player's voice determines how far the game player's chat message is carried to other players in the virtual game environment. The other players either hear the message originator's actual voice (via voice chat) or see a text translation of the speech.

There are two questions here. Firstly, will it happen? Yes, I very much believe so. Nintendo may have discounted the use of a mic, but the interview (allegedly conducted by EGM) was never confirmed and there are various reasons to believe otherwise.

First of all, remember that Nintendo seems to be developing a Karaoke game for Wii. It has also been pointed out many times that a speaker is the same as a microphone (see this Wii thread or this engineering thread).

And if that isn´t enough, there is always the possibility of a separate headset being made available (though I personally doubt it, because Nintendo have told me they don´t want to issue too many accessories, which makes sense).

Lastly, Nintendo have successfully found innovative uses for the microphone built into the DS, from ´Project Rub´ and ´Brain Training´ to ´Metroid Prime: Hunters´. Why not translate this know-how into the home console arena? In fact, a new patent entitled Game program and game apparatus concerns itself with the specifics of a user blowing into the microphone.

So, I treat a microphone for Wii as a given. Also, I treat the implementation of said patents as a given. Not only because they exist, but also because the use would make a lot of sense, given Nintendo´s different take on creating an online community. As has correctly been pointed out, voice recognition also enables censorship of swear words. This is a feature that Nintendo will be very keen on implementing. Expect voice recognition to happen. This may even be announced at the Games Convention.

The second question pertains to the poster who let these patents resurface. Is he real? Probably not. Because going back to an old patent and stating no more than is already mentioned in it is a pretty safe bet. If I were to produce a fake, that´s just how I would do it. It pretty much guarantees that reality won´t show you up.

The guy is most likely fake. But his predictions are going to materialize anyway. So who cares about him?

Famed game designer American McGee (Alice, Oz) statet in an interview conducted by Computer and Videogames, that the Wii ist the one and only true next generation console. The others are just simple upgrades. The interview will be fully published tomorrow on C&VG.

No way the technology exists to do this accurately yet. Patents exist for all kinds of impractical ideas. Nintendo can't even get the DS to recognize the word Blue. And that is in a pre-defined set of words. English is such an abigious language, and so much of what we understand our brains piece together through context - a computer would have no chance, especially not with people just talking on the fly. We can't even really do accurate dictation software if people are speaking slowly and clearly and deliberately.

this same "insider" allegedly predicted the speaker in the wiimote 3 months before e3...

If this was a secret they had been hiding you could cross reference it with Kaplin's commnents on mainly the hardcore will love the feature. It falls more in line with anything else that could fall in my mind.

This same "insider" allegedly predicted the speaker in the wiimote 3 months before e3...

Thanks for your comments, I read that. But because I don´t have IGN Insider access, I had to dismiss this claim entirely. Posts can be edited in retrospect, sometimes without that showing up. So I am hesitant about this one.

If this was a secret they had been hiding you could cross reference it with Kaplin's commnents on mainly the hardcore will love the feature. It falls more in line with anything else that could fall in my mind.

A very good point. I had entirely forgotten about her comments. That´s definitely in support of this voice recognition teamspeak thingy. Thanks.