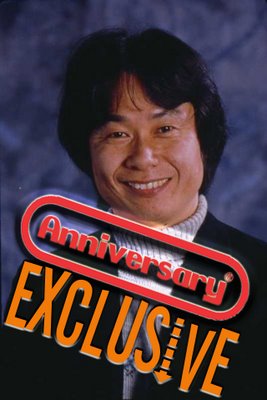 Welcome to my anniversary exclusive. It is hard to imagine, but in only a few days my page view counter will hit the one million mark. I would like to thank all my readers again for making this blog possible. And what better way to celebrate this than an exclusive interview with Shigeru Miyamoto himself, Nintendo´s head designer and manager of the reknowned EAD studio.

I have conducted the interview on behalf of three news outlets and am currently unable to post the transcript. I will do so soon. In the meantime you may read my first article (in German) at Der Spiegel, a weekly German magazine (comparable to Newsweek or The Economist). I will translate the article soon. Please check the Google translation in the meantime.

You have probably heard the big news about Miyamoto confirming that ´Zelda: Twilight Princess´ will have special controller features when played on the Revolution. In fact, Miyamoto confirmed this piece of information exclusively to me, much to everyone´s surprise. Nintendo of Europe then had to react quickly and posted a press statement before I could write the article. Nevertheless, this bit of information was revealed exclusively to me, writing on behalf of Der Spiegel. Here´s the translated excerpt from the article:

´Legend of Zelda: Twilight Princess´ will still be released for the current console, the Gamecube. A sword fight however would be more than suitable for the Revolution controller. As we reported already yesterday, Miyamoto let this one slip, much to the PR people´s surprise. "Let me put it this way," Miyamoto says. "When you are going to play ´Twilight Princess´ on the Revolution, you are going to be able to use the Revolution controller. I can confirm that you can shoot arrows by utilizing the remote control."

In order to illustrate, he points his hand at us and fires a few imagniary arrows in our direction. He probably forgot that this piece of information was supposed to remain a secret.

If you can, please check out the entire article. As I said before, I will post the transcript as soon as my other articles are online.

EDIT My second article is now online. It was written for the online part of Die Zeit, Germany´s most reputable weekly paper. If you are able to read German, please check it out. I will now post the interview as soon as I can.

EDIT Thank you all for your patience. Here is the interview in full. Please be advised that Miyamoto´s answers (through a translator) are verbatim. Not all parts make perfect sense. For a number of answers, I will consult Japanese native speakers in due time and, hopefully, will be able to clarify a number of points.

On a legal note: You are free to republish this entire interview or quote from it, as long as you do not alter the content in any way and you also absolutely must cite the appropriate sources by copying and pasting the following HTML code alongside without alteration: