GoNintendo posted a possible scoop on a Wii microphone and decided to take it back down due to allegations of it being fake. The original story is still up on Wii Nation.

The rumour has it that a hidden option button ´Add Mic´ becomes barely visible when you do the following:

Here is an image: 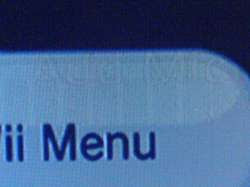 I have always considered a microphone for Wii a given. The GameCube had one, for a start. Also, there was plenty circumstantial evidence already. Early last year, the Wii´s hardware was proven to feature an audio input.

In late November, Reggie talked about a microphone, though that may have been a slip of the tongue.

Source: GoNintendo, Wii Nation
Thanks to: The Tanooki

Posted by Falafelkid at 8:29 pm

Although the authenticity of the photo is in question, the addition of a microphone seems like an obvious peripheral for the Nintendo Wii. This is not a far out idea considering X-Box1, 360, GameCube, DreamCast, and the PC all use(d) a microphone. Don’t forget the DS also has one built in.

It seems that Sony is brining rumble back

hey Fal, So this seems a given in my book I figured this much to be true. I'm also still holding out that the WII can do something else that hasnt been announced. I dont know I just think that nintendo isnt discussing all yet.

All I see is low rez

Is that the Nintendo Wii with such low res?

A mic for the Wii has been considered as a given by many people.


But as far as i know, speakers and microphones are the same device, plugged in another way. That said, it could be possible to use the Wiimote speaker as an audio input, making an extra device like a mic innecesary.

If you want to try it by yourself, just plug a pair of headphones into your computers mic jack, and use it as you would use a mic. The only difference could be the audio quality and volume.

Fal, what is this about Nintendo not being able to reveal anything new at GDC?

I think the microphone would be a great idea. I really wish there would have been one built into the controller. It seems like it would be perfect for a built in mic.

What we are seeing is a burned screen persistance.

When I begin to play this Seal Online game, I first go to buy seal online cegel to buy some my favorite and beautiful clothes to dress up my character. I have spent cheap seal cegel to buy my favorite cloth. I mean we have anime and some necessary seal online cegel based games that do not look really kid dish. Though I will admit with my own seal cegel I went crazy on leveling with DECO. Some of the skills that we can use our sealonline cegel to improve to look amazing, and are fun to just watch honestly.

sohbet odalari Free Post It Notes software that offers you an easy way to keep all information
you have to remember on the desktop and manage your time in sevgiand
software application to put notes on to your desktopsohbetPost free video classifieds and video ads in all local classifieds.
... The software is sohbet odalari free for personal use only. asksevgi

sohbet odalari Free Post It Notes software that offers you an easy way to keep all information
you have to remember on the desktop and manage your time in sevgiand
software application to put notes on to your desktopsohbetPost free video classifieds and video ads in all local classifieds.
... The software is sohbet odalari free for personal use only. asksevgi

Hi There, I just spent a little time reading through your
posts, which I found entirely by mistake whilst researching one of
my projects. Please continue to write more because it’s unusual that someone has
something interesting to say about this. Will be waiting for more!