Microsoft is planning to introduce motion sensitivity to the Xbox360 "by the end of next year", XboxFamily has learnt.

The details are still sketchy, but it appears a first-party add-on to existing controllers may be the delivery method of the technology. (...) It appears Microsoft has contracted the Saratoga, California firm, Gyration to handle the peripheral.

Gyration developed the original Wii controller prototypes, as the company claims on their site:

Gyration developed the first motion sensing Nintendo game controller prototype in 2001 and developed much of the interaction concepts between motion controllers and game play.

Now, you may not have heard of the news site at the source of this rumour since they are fairly new. Registered to an address in Cincinnati, Ohio, they are "comprised of several original members of SEGAone.com which originally launched in the fall of 2000", according to their own history.

The new site was founded this year and initially off to a shaky start. But they seemed to have turned a corner within the last few months.

What lends them some credibility in my books is the fact that they dispel some myths about the rumour they started. In a second article, they claim that a number of prototype designs "going around the net" are unrelated to the Xbox360. Unfortunately, they do not name any source. Here they are: 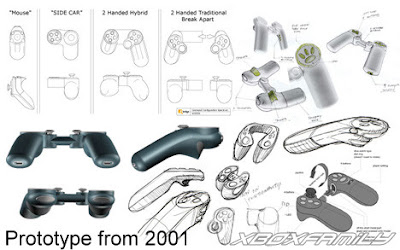 We’re positive the images going around the net are not of the new hardware. (...) [They] are images of the original motion-sensing prototypes that Gyration had designed for the Wii in 2001.

I would not rule out that the people over at XboxFamily are trustworthy. If they have indeed worked as game editors for more than seven years, it is possible that they may have good enough sources to break a story like this one.

But please bear in mind that motion sensitivity for the Xbox360 can only ever come in the form of an optional peripheral. And the rumour claims no more. So such a peripheral can achieve no more than the ´Eye Toy´ camera achieved for the PlayStation2. Sure, that peripheral was a small revolution in gaming. But since it was a peripheral, only a dozen games or so actually made use of it, although ´Eye Toy´ sold very well.

Also, bear in mind that Microsoft, at least until recently, appeared highly sceptical of motion sensitivity. At the E3 2006, Robbie Bach snubbed at the idea of motion sensitive controls, in an interview with me.

There are two things to know. One: we did gyroscopic controls in a controller six years ago. We know exactly how interesting it is. And it is useful for a very narrow segment of the games. So it is interesting as an add-on. It's not at all interesting as the main controller for your game console and we know that from experience.

EDIT Respected Xbox news site TeamXbox has thrown their weight behind this rumour. It appears that XboxFamily really were onto something.

Posted by Falafelkid at 3:31 pm

Nintendo really had the right idea on motion sensitivity, didn't they?

It seems like Nintendo had the right idea about a lot of other things as well...

these days sony and microsoft get there ideas from nintendo mags :P

As usual, Nintendo innovates, everyone else makes money off of it. If they came out proper pointing system which could be used for FPS's, I'd likely finally buy a 360. I don't think most companies are ever going to take the Wii very seriously in that genre unfortunately. Not as long as Wii owners only want "casual" games. *sarcasm*

BACK THE INERVATOR NOT THE MONKEY

ANYONE BACKS THIS THERE PATHETIC FANBOYS

2 only hardcore nintendo fans want it


4 wii carnt keep up this momentum in sales


now microsoft are copying it

IF YOU WANTED MOTION WHY DIDNT YOU BACK WII

ok lets all be childish like ials. lets see.. I A-nal L-ittle S-ailors
ok haha im sure everyone will LOL at my funny name calling like they do at yours ials.

I hate to admit it but falafel seems to not care about this blog much anymore. he used to comment and tell lil fukers wea to take there shit but now he just leaves em to it. Please prove me wrong fal bt its your blog so waeva mate

nz gay youz a biiiiiiiiiitch u get ur wig twisted

You will get a beautiful cloth which in the game if we want to need the beautiful cloth, we can use our own Scions Of Fate gold to buy. The one I owned on my character is one of my friends sent to me the necessary SOF gold. Sometimes we can share the trophy as the necessary Scions Of Fate money together, and we do quest together. I do not have enough confidence and cheap SOF gold about my weak memory. First I have to buy sof gold to improve my pet which I have a lovely leopard in this game.

nice plan from Microsoft.. its really cool.. thanks for the update.. keep blogging..

Gyration producedguild wars 2 key the first motion realizing Manufacturers sport game controller prototype with 2001 along with designed a lot of the actual relationship methods in between activity RS goldgame controllers and hands per hour.

That is really cool. Thanks for finding it. Some really good ideas there, this is going to be a real time sink.Galaxy 4 cases I am a china tour lover,You can learn more: