For a start, Bloober Team claims to be an approved developer by both Nintendo and Sony, currently seeking Microsoft approval. The studio also claims to be developing four titles and has apparently developed two graphics engines.

Engines
´Cross Engine´ (Wii, PC, with Xbox360 and PSP support by the end of the year)
´Black Horse engine´ (DS)

No screenshots are available on the site. Instead, the studio shows three pieces of artwork for ´Last Flight´. Here is one of them: 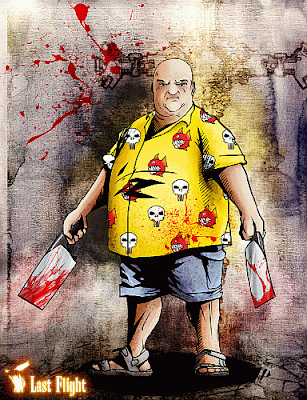 Interestingly enough, the website seems to make no mention of parent studio Nibris, although some images are shared between the websites and Nibris links to Bloober as a "befriended studio".

While the site looks professional, it also contains some spelling mistakes and awkward use of English.

It seems also worthy of note that the studio appears to concentrate solely on digital distribution. It seems that they will not release any games on physical media.

I know some of have been waiting for my in-depth analysis of Nibris for some time. While I must apologize for the time it took me so far, it is coming along and will be published as soon my little son gives me some time off. I estimate that it should be done within the next four weeks.

Posted by Falafelkid at 1:54 pm

Good article, I love the ideas that both Nibris and the Bloober team have, hopefully we can be playing there games very soon.

useless thread!
Nibris doesn't exist! they have anything to sell! It's just a buzz from a small group of students or geeks!! Is it possible to stop relay this joke?
Tx

They say it´s the first trailer - but we´ve seen it before. Do you remember?

Hi Raphael. Do you think this is ´The Calling´? Possible, but not necessarily.

Yes, that´s my guess. Even if I can´t watch the old videos, since YouTube has deleted the clips.

But in my memorization it looks nealy the same! Not only the slow gameplay and the art direction, but also the thin, long arm of the main character and the little girl.

Though these kind of oakley frogskins may be fabricated along with uijgfnhm classy, these are cheap. this specific actually is primarily since nearly all while using users involving Oakley sunglasses, your enormous men and women, are not able to spend on deluxe solutions. most of the charges involving oakley frogskins presented from the market are generally underneath one hundred bucks. Your temple involving oakley jawbone can be wide-ranging along with comprehensive involving creative imagination.Zero matter your fine rounded radian or maybe your oblong composition, your temple involving oakley flak jacket can be delicate. The idea not simply calls for your seen elegance into mind, but in addition can be warm for you to don. moreover for you to these kind of, your permanent fixture involving chemical along with shade can be fair. Right now, you may can understand the contact lenses involving individual's oakley radar come to be even bigger along with more substantial. buyers whom place on some Oakley sunglasses using enormous contact lenses declare who's may screen his or her good individuality.

Here, I do not actually consider it is likely to have effect.

We make-believeBuy D3 Items that a number of typical sport, if at all possible some thing picnic, looks superior and it's, in truth, the most effective shopping recreation within the gaming console. Many of us add in some technology speak for no reason realize our self because unfortunately wecheap Guild wars 2 Gold cannot really know everything about online games

You will find also an intriguing new function termed Trending Now, which provides towards your notice web pages which have had a lot of targeted traffic not long ago. We will carry you extra the minute we've got a review machine.
Dell Studio 1535 AC Adapter
Dell vostro 1700 Battery
Dell latitude d610 Battery
Dell studio 1537 Battery
Are you glad to determine the again from the ads? Or would you feel it a shocker Amazon is charging for your privilege? Allow me know during the opinions down below, or on our Facebook webpage.

The latest Tweets from Celebrity birthdays with 22 million users visit our website each month.