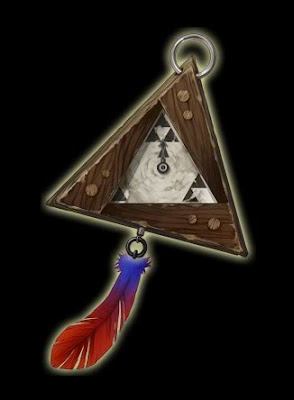 The clock itself is in triangular shape and there is a completed Triforce logo at the top with incomplete ones in the two lower corners each. There is an unfamiliar feather dangling from the clock and the entire object rises and falls gently.

One revolution of the Zelda clock is thirty seconds, at which point it briefly glows and the second digit returns to its starting position the way it came, counter-clockwise. The main digit remains at the top, pointing to the completed Triforce logo.

The seconds counting down will end sometime early next Friday, January 23rd. When setting my internal clock forward, though, the countdown expired on September 28th 2009, at 14:13:55. Then, the numbers disappear and the (mis-spelt) message "comming soon" appears in their place.

The flash animation is called ´prepre_watch.swf´ and the source code embeds it with the command ´?update=20081228_2018´. Altering the values does not seem to make much difference, however.

I must admit that I have no idea what this could mean. It is very unlikely that Nintendo would outsource either the development or the publishing part of a Zelda game to any third party. If at all, this would have to be a spin-off.

I guess that we will know more by Friday. By then, a similar countdown on a SEGA server ends, teasing the involvement of Takao Miyoshi from one of SEGA's internal studios and showing Mario symbols.

EDIT The Sega game has been revealed as a WiiWare title.

The game is called Pole’s Big Adventure and is supposed to mock 8-bit games released on the Nintendo Entertainment system around its heyday. So that means the title will be on Nintendo’s WiiWare, pricing for Japan currently is 500 Wii Points.

The game is supposed to have inside jokes in each level. The teaser site had a mushroom and apparently in Japanese that is slang for a male’s penis. Now you add pole and a mushroom that grew when you touched it with the mouse, you are going to get a game with alot of dick jokes.

The Marvelous game turns out to be Hero 30, an old-school RPG for the PlayStation Portable.

Posted by Falafelkid at 7:50 pm

big up falafel mate check my comment to your last update feat. the best looking screens ever on a Ninty console to date!

nice.. i have no idea what that might be. i doubt some game developer/publisher would use zelda symbols for non-zelda game... that would be.. just stupid


those MH3 screens are just great, those guys are REALLY putting some effort, what I can't say about high voltage guys

awesome, finally something worth time and money

You know the Triforce is not unique, do you?

You know the Triforce is not unique, do you?

Interesting find. But the Triforce is only one stage of the fractal you linked to. Why would it be precisely that stage that matches the Triforce? Too big a coincidence - and fractals have no bearing on game licenses.

tadashi dude, yes, i know it's not unique, but it's just too conected and recognized symbol for zelda games for many years now.

that's why i wrote GAME DEVELOPER. if milk-making company would use it, it would pass unnoticed.

it's not forbidden, it's just stupid. like playstaion 3 spider-man font

@Pero
"those MH3 screens are just great, those guys are REALLY putting some effort, what I can't say about high voltage guys

awesome, finally something worth time and money"

Well said mate, I totally agree. Finally something that does justice to the potential...

Nintendo did let Capcom produce the two Zelda "Oracle" / "Gaiden" Games for the Gameboy Color. And, if I recall correctly, a feather was an item in these games that allowed Link to jump... My guess would be either a remake, or a new game in similar fashion, if is is after all about Zelda and not just a joke about it. Or could it be a Harvest Moon: Zelda Edition? lol

"One revolution of the Zelda clock is thirty seconds, at which point it briefly glows and the second digit returns to its starting position the way it came, counter-clockwise."

This reminds me at Majoras Mask.

It seems that this mystery game has been revealed, I’m guessing many of you will be disappointed to learn that it is a PSP game titled “Hero 30”

system on a chip amd/ati fusion design...super silicon on insulator and 45 or even 32 die size..

Hollywood hd has a embedded arm cpu and a improved sound chip its a ultra high bandwidth dual core gpu on a chip integrated version of wii tech..

wii motion plus and 3d mouse/pointer supported in both hands

about the game- of course, damn you marvelous e

but good for zelda, i didnt like any of third party zeldas

I think, if the console will be released before 2013, a `Wii HD´ only makes sense, if every `Wii HD´-Game can also be played on the regular Wii.

So it would be a very cool thing, if Nintendo has developed a programm, which downgrades the very sharp and detailed `Wii HD´-graphics to the Wii, without any effort from the developers.

If thats not the case, it would be foolish to release a new console before the demand for the Wii collapses.

iv seen and have interacted with "!wiiHD!"not the actual name i can confirm the following...

both controls wiimote 2 nunchuck 2 have a polished version of wii motion plus, built in, nunchuck 2 also has rv 3d mouse/pointer just like wiimote 2 both also have rumble paks and speakers (dual handed rumble/speaker sounds) for full 3d motion 3d mouse and feed back no wires at all no physical link between wiimote2/nunchuck2 both controllers can work on there own as a wiimote would do..

console size maybe smaller than wii but no chance of it being any bigger....

everything is linked via on die custom high speed inter connectors not standard buses or fsb....

[Overlord: Dark Legend Associate Producer Dean Scott admits it may be a "lame cliche," but he believes the dark master's Wii incarnation "looks like the 360 version." Speaking with Videogamer.com, Scott could hardly keep his composure as he detailed how confident he was in the visuals for the upcoming action-adventure game, exclaiming it "blows away just about everything else" on the Wii.

Scott may be biased, considering he is the producer of the game, but Wii owners may want to take notice if for no other reason than to help fill the dark Pikmin-sized void in their hearts. Overlord: Dark Legend lands on the Wii this summer; a companion DS version, Overlord: Minions, will release later this year.]

Anybody know what happen to the Nibris article?

"What we are looking at are the cumulative Wii and DS sales through the end of 2008. Wii has been selling at industry’s record pace so far, and with new customers acquired by the gaming population expansion efforts, it is not impossible for Wii’s total sales to exceed the final install base of PS2. Wii still has much more room for expansion. We can expect more sales of software in the next fiscal year than in the current year. With what kind of software is Nintendo going to achieve this goal? Well, it will be shown at E3 to be held in the U.S. this June."

Great post, I love the Zelda games, ever since the NES

Dead Space is a rail based shooter.
I love my wii but im frustrated with Nintendo.

DEV EXCLUSIVES FOR PS3 YOU DIE

maybe Link will make a guest appearance in this game

Check out a FREE excerpt of Part One if you haven’t yet here: http://hustleandwin.com/hustleandwin-excerpts.pdf

Pre-Orders for Part Two: Rap, Race and Revolution NOW directly from Myspace.com/HustleWin and on Amazon.com!

Also, check Supreme out on YouTube.com/SupremeUTV:

That's awesome, Zelda is the best game ever!

I don't think a game developer would use Zelda symbols for a game. That's copyright infringement.

Weekends to peopleig2tmean that they can have a two-day wowgold4europe good rest. For example， people gameusdcan go out to enjoy themselves or get meinwowgoldtogether with relatives and friends to talk with each storeingameother or watch interesting video tapes with the speebiewhole family.
Everyone spends agamegoldweekends in his ownmmoflyway. Within two days,some people can relax themselves by listening to music， reading novels，or watchingogeworld films. Others perhaps are more active by playing basketball，wimming ormmorpgvipdancing. Different people have different gamesavorrelaxations.
I often spend weekends withoggsalemy family or my friends. Sometimes my parents take me on a visit to their old friends. Sometimesgamersell I go to the library to study or borrow some books tommovirtexgain much knowledge. I also go to see various exhibition to broadenrpg tradermy vision. An excursion to seashore or mountain resorts is my favorite way of spending weekends. Weekends are always enjoyable for me.
igxe swagvaultoforu wowgold-usaignmax wowgoldlivebrogame thsaleGoldRockU

I love your blog, always learn a lot from it. Thanks, good day!
Small items,big luxury!
Get ugg boots as gifts in christmas.
Ugg boots, Ugg outlet, 70% off, Cheap ugg boots sale online .

saceth My pals put on Cheap D3 Goldthe extender as well as hes signed up by means of these people and has now got the many newest brands for that Wii console. Anybody get there game titles from online?Cheap GW2 Gold