Avid readers of this blog will remember that I broke the story about Wii being significantly underpowered and possibly being priced as low as $99 because of it (see Revolution to be least powerful, October 2005).

Now, there is a fresh rumour that Wii might cost $149. The good people at Kotaku have gotten hold of a scan of VStyle, a new supplement to Vibe magazine, the first issue of which has the following article: 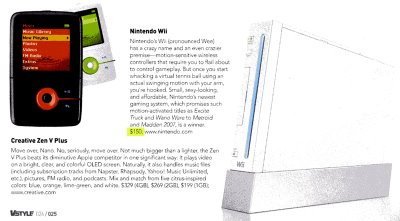 Nintendo's Wii (pronounced Wee) has a crazy name and an even crazier premise--motion-sensitive wireless controllers that require you to flail about to control gameplay. But once you start whacking a virtual tennis ball using an actual swinging motion with your arm, you're hooked. Small, sexy-looking, and affordable, Nintendo's newest gaming system, which promises such motion-activated titles as Excite Truck and Wario Ware to Metroid and Madden 2007, is a winner. $150; www.nintendo.com

I didn´t post this straight away because I was in contact with Vibe magazine about this story. I called them a number of times, but they were unable to trace the author of this short piece. However, another author assured me that they go to great lengths to check their information and I should simply take their word for it.

As I mentioned above, I have been convinced of a surprisingly low price point all along (ever since I heard those rumours from developers, anyway). So I do believe that Vibe magazine did get it right, possibly publishing some off-the-record info they were given.

Either way, I am confident that this is the last rumour about Wii´s price tag we will ever have to deal with. Less than fifteen hours from the time of posting and we will learn both the Japanese launch date and price. Still, interesting stuff.

I think you've got your times messed up. If I remember correctly the Japanese show starts at around 9am on Thursday the 14th.

If this is true then we still have around 11 or so hours to go, not 9.

Hi Eatchildren (nice nick btw). Thanks. I noticed my mistake immediately after posting and corrected it already. Thanks for the heads-up nonetheless.

Assuming the NCL event starts at 10am tomorrow, that would be 9pm Eastern today or 3am Central European Time.

Hey, no worries, and thanks.

I don't know if you've seen this, but its a handy link for people to find out when the shows start in their area:

I'm pretty sure the conferences are set to start at 10am at each location, but I think there might be a morning breakfast thing at 9am as well, or at least there is for the US show (I think).

Either way, we know what Nintendo are like with there conferences. It could start late, it could start a bit earlier. Who knows.

these times will be the official times for the events:

So you believed it was $99 dollars or low even when you thought there was going to be stereoscopic 3D????
Come on give me a break.
There is no way you believed that!
Period.
I love your blog but have followed it a long time.
No one would believe that.

So you believed it was $99 dollars or low even when you thought there was going to be stereoscopic 3D????

Hehe. No, of course not. I have never said that there is much of a chance of some kind of 3D technology implemented. And if Nintendo actually would be planning something like this, it would obviously be an accessory and, as such, sold separately.

As to pricing of such a peripheral, my research has shown that such an accessory would cost no more than an additional $99.

So Falafelkid, you're saying that there's a periphera that handle 3d stereo for Wii !?, is this your final hint kinda like that red steel game board image !?

You're saying that there's a periphera that handle 3d stereo for Wii !?, is this your final hint kinda like that red steel game board image !?

No, I said there´s hardly a chance for something like that. Arsenis already asked me to give him a little hint of things to come under the comments to my last post - and I was happy to oblige ;)

According to your hint I guess there is a new cooking game.

Aaaarg im COnfuse !! i know u guys are around german and those places but im Actually in Massachussetts , USA! Easter time ! so at what time is this happing for me!?
i really want to know so i can be conected

thank you to anyone who help me!!

US event: Thursday 9am

Wow.Its mresmerizing to see how hard the wii graphics suck when looking at new Madden and Sonic shots.

Just go with the flow

Please give me some nice rich vivid shots with a high polygon count some bumped surfaces a little moon light a great art style a little bit of this and a little bit of that,some nice colours,a beautiful horizon,some filter flavour,just a lil bit and I shall buy Wii and support Nintendo!

Hello,you reached the voice mail of IALS,please leave your name and number and I'll get back to you soon as possible.

haha now i know that at 9 everythings starts unviel!!!

Superfan is that you?

Damnit Falafel!
Let me start by saying ive been coming to your site for quite awhile. I usually lurk and never really leave comments, the only comments i have left are in your last thread. But I'm leaving this comment because I don't consider a chubby homo-erotic looking cartoon baker HYPE no matter how relevant he may be to whatever the hell your trying to hint at. I've been faithfully trying to find out all I can about Wii since before e3 2005, almost daily! I'm sick of waiting! I could blame Nintendo for the cruel games they play, but rather I choose to take it out on someone who knows more than me. You. I WANT FULL DISCLOSURE I DONT CARE IF ILL KNOW TONIGHT I WANT IT NOW!!!

Come on Falafel, do the right thing, be the ENGINEER of the HYPE train. Ride the caboose man, you know u wanna.... chooo... chooo

I have made my opinion in relation to next gen gaming !

The Wii and the 360 is the best choice
And im going to buy these machines ! Hell Yeah !!

The English version of Iwata interviewing his colleagues about the history of Wii is, of course, here.

kid you think its worth it to stay up all night for news ?
Nintendo better shows some mesmerizing magnifiscent polished games otherwise The IALS feels impelled to pick up 360 from the shelves.

You hear the IALS Nintendo?

Its your last fucking chance to convince THE INFAMOUS ANONYMOUS LIGHT SHEDDER that your system is worth the bucks stupid!

Slightly off-topic, but there is the best Nintendo T-Shirt over at 80sTees. Check it out. I ordered mine this morning. ;)

This ones not bad either:

Right, little more than three hours to go now until the NCL event starts. It´s 9pm Eastern or 3am CET, for your information. And, please, write English on this blog.

Thanx.
It was a long road.
Lets see if it was worth it.

It was a long road.

That, my friend, is an understatement. ;)

I live in the uk...what time does the japan event start for me? If anyone responds to this thank you in advance :)

No, I said there´s hardly a chance for something like that. Arsenis already asked me to give him a little hint of things to come under the comments to my last post - and I was happy to oblige ;)

Thanx Fal... hey mpdid got mad at your hint... but then so did everyone at the board game...

on another note... so much confusion with the times..

Didn't get mad at the hint, I'm just burnt out and am glad it's coming to an end :)


When I look back,the outcome of everything is quite different from what I had envisioned!

I really thought Nintendo was about to push their image in a new direction.
I was expecting them to put all their eggs in one basket this time around with high end hardware and new Ips!
But as it turns out they went for "dolo".

Seriously,I think they did several things right and just few things wrong with Wii.Here are two things that I must critizise :

1.The name.While the name is becoming less annoying since people accustom themselve to it nonetheless it still leaves a lil bitter taste in my mouth everytime I pronounce it.It just doesnt feel right even if the message is on point.Furthermore,I have to say that I find the logo a lil bit cheap compared to the Playstation logo.Its really not that well thought out but to be fair, there's obviously no accounting for taste.


2.NEW IPs.This is THE point that really is on the tip of my tongue.Very dissapointing.Nintendo still places most emphasize on its long standing franchises,instead of focusing on new timely heroes.Now its out of question that Nintendo cannot abbondon Mario and Zelda for reasons I do not need to elaborate on further, but I for one would still love to see Nintendo come up with a "mellowed" franchise,you know,something that is leaned more towards older gamers cause, lets not kid ourselves here,its no mystery that both Mario and Zelda have sort of a limited appeal to people of certain ages.Many people are tired of Mario and Zelda.Miyamoto needs to realize that.This is a big opportunity for him and Nintendo to establish a new face a new character.Mario is the best example to illustrate how a new idea can set the ball rolling.


However,as I mentioned,they DID several things right from the design of the console to the promising new Wii-mote controller, amongst other things.I hope everything turns out to good account in the end.

Well said IALS I agree with most of it.
I hope they will anounce some triple a titles!

If the NCL event starts at 10am local time, there is just over an hour to go, people!

Meanwhile you might want to enjoy this video to kill time.

I think this video gives an account of the long road up to this day.
It sets the mood right.

Wow.Gonintendo has become a very popular,crowded place but nonetheless THE IALS for one preffers Kids' untroubled blog,in fact this is the only place where THE IALS posts something at all.
Its a nice silent place.Anyway, I know this sounds a lil bit paradox coming from THE IALS as he is the EVIL GENIUS here but..you know.. whatever
;)

New sensor bar pics shown on the latest edition of the Iwata interview.

Right, I´m opening the chat room now. Give me a few minutes to set it up.

Status report by a fan about the Japan-Event:

the whole internet and all fanboys got the times WRONG!!!!!!!!!!
know ever knew the correct time for the Japan event.

I was waiting with some others we were absolutley disappointed.

Now we are waiting for 7am german time/2pm japan time

It will cost 250 bucks in the US, with one controller and Wii sports !! And it is launching after Gears of War or PS3 !
Nintendo failed !

The price is too much for an overclocked gamecube, and the price for an additional controller is stupid expensive !

If you are going to buy the Wii than you will buy also a second controller, than zelda or an other game, and, and, ...

I mean this is too much money for this kind of hardware, sorry, but they dissapointed clearly.